Two Towns Over by poet Darren Demaree includes 56 poems, mostly short, but all powerfully aimed at the drug addiction crisis in Ohio and other states. The poems are specific to Ohio; included are several odes to different townships and poems named by towns.

Opioid addiction is not the first drug crisis America has faced; that mantle belongs to heroin, another opioid, developed in some of the same laboratories as aspirin (and by the same manufacturer). Heroin was even sold as lozenges and pastilles and given to young children. For many years it was broadly available and believed to be addiction-free. Wrong.

The landscape of addiction can look attractive, even beautiful and seductive, something to take the pain away. Then that landscape becomes stark. Transposed poetically to the landscape of Ohio, it becomes even more stark, and deadly. 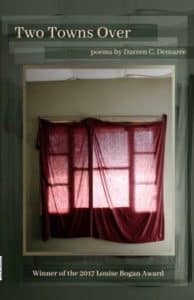 We’ve named all of the animals
& we’ve put our fingers into the names
of each of them. We’ve dragged

their names up to our faces
& forced them to meet our made-
up world. Sometimes we are given

kisses. Sometimes there is
a great warmth. We know they
are wild. We know there is danger.

& yet, what a pool to drown in.
The chemicals of each breed
brings a new threat.

to re-think exactly what these drugs
are in our world. They are wolves.
We’ve been raised by them. The poems are unrelenting, as unrelenting as the addiction they’re documenting. They move from town to town, township to township, passing the train tracks, the pizza parlors, the grain elevators, and the chain stores, all of those scenes dissolving into what he calls “the burial of the living.”

Demaree is the author of several poetry collections, including As We Refer to Our Bodies (2013), Temporary Champions (2014), Not for Art Nor Prayer (2015), The Pony Governor (2015), Many Full Hands Applauding Inelegantly (2016), A Fire Without Light (2017), and The Nineteen Steps Between Us. He received degrees from Wooster University and Miami University. He is the founding editor of Ovenbird Poetry and managing editor of Best of the Net Anthology, and he’s received 10 Pushcart Prize nominations. He lives in Ohio.

Two Towns Over is social commentary and cultural critique. But it’s also something more. Reading it is like watching a black-and-white documentary of unfolding destruction. It asks the question, how do we stop this? How do we stop?

Photo by Neal Fowler, Creative Commons, via Flickr. Post by Glynn Young, author of the novels Dancing Priest, A Light Shining, and the newly published Dancing King, and Poetry at Work.