Is Grief Is the Thing with Feathers by British writer Max Porter a novel, a collection of poems, both a novel and poetry, neither one, or some new literary genre we haven’t seen before?

It’s officially classified as a novel, but it doesn’t read like any novel I’ve read before. It moves, jumps, shifts, and occasionally leaps between three narrative voices—Dad, Boys, and Crow. Physically, the text looks like a poetry collection. Sort of. It’s divided into three parts (like Caesar’s Gaul?) but contains no chapters, unless you count a poem as a chapter (I don’t). It begins with a corrected version of an Emily Dickinson poem.

It doesn’t follow a straight narrative line. It does follow a kind of thematic line. That thematic line is grief, the grief involved with the loss of a wife and mother. It’s no surprise that Dad is more aware of grief than the twin boys; he’s a bit of an “overthinker” and an intellectual type, and they are, well, just boys. And Crow? Crow is that creature with feathers and a smart mouth and a keen insight. He represents the black presence of grief in a family that’s been upended.

I like Crow. Crow knows his place. He knows he has a job to do, and when it’s done, he’ll leave. He leaves feathers on pillows and scattered around the family’s flat. Crow sometimes feels persecuted, and he talks about the hundreds of memoirs he’s written. He tells stories that begin with “Once upon a time.” He watches over the boys.

The boys go on about their business of being boys. They know they’ve lost their mother, and they miss her, sometimes terribly. But in some odd way they know things will eventually right themselves. Here’s one of the “chapters” in this “novel.” 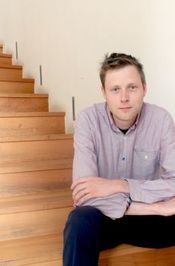 Once we were doing some drawing at
the kitchen table and Dad said, ‘We
can never think too much about how
important Picasso is,’ and my brother said,
‘Wankerama, Dad!’ and Dad was nearly
sick from laughing so hard.

We abused him and mocked him because it
seemed to remind him of our Mum.

Once upon a time we went to a secret
place with our Gran. It was a huge semi-
circular wall of red sand that was once in
the sea. Give it a kick and a shell would
fall out. This was in the middle of a bright
yellow rapeseed field.

Dad did not come. That was something
Dad had nothing to do with.

Grief Is the Thing with Feathers is crazy, mesmerizing, fascinating, and creative, not to mention being one of the most unusual novels you might come across. You’re well hooked into it by the time you figure out that Crow represents grief, and that Crow is not only necessary and important but ultimately a good thing for this stricken family. A very good thing.

This is Porter’s first book. He is executive director of the literary magazine Granta and Portobello Books and lives in south London with his family.

Published in Britain in 2015 and the recipient of a number of awards and recognitions, Grief Is the Thing with Feathers is one remarkable novel—uh, poetry collection—um, something.

Porter reads from Grief Is the Thing with Feathers

Photo by Seabamirum, Creative Commons, via Flickr. Post by Glynn Young, author of the novels Dancing Priest, and A Light Shining, and the newly published Dancing King, and Poetry at Work.