In writing about the poems of Henry Wadsworth Longfellow—Paul Revere’s Ride, Evangeline, and The Courtship of Miles Standish—I’ve been using an edition of his poetry published in 1898 by Houghton Mifflin. It’s the illustrated “household edition” of his complete poems and, according to the price sheet at the front of the volume, it would have cost $1.50 when it was published. (I have the non-gilt edition; the gilt-edged edition would have been $2.) That translates to about $42 today, and about $56 for the gilt edition.

The first owner of the book inscribed her name and the date on an inside cover page: Catherina Gerhard, Christmas 1899. The inscription suggests it was a Christmas present, and that Catherina was pleased enough with the gift to write her name inside. Something I never noticed before, likely because the book opened to the page with the name and date, was that the page before it was slightly stuck to the front cover. I carefully pried them apart, and discovered no additional writing or inscription, but a visiting card, simply printed with the name “Miss Jenny Todt.”

We still make use of printed business cards today, but this visiting card harks back to the 19th and early 20th centuries, when visiting cards or calling cards were in widespread use by the middle and upper classes in Britain, the United States, Canada, and many other countries. There was an entire ritual of manners with visiting cards, which you presented at the home of someone you would like to visit. The cards grew quite elaborate, with pictures, drawings, various inscriptions, and even poems; but simple cards, like Miss Todt’s, were also commonly used. I envision Catherina Gerhard reading her Longfellow when Miss Jennie Todt comes calling. The butler or the maid brings the card to Catherina, and she agrees to meet with her visitor. She tucks the card inside the front cover of her Longfellow poems.

Perhaps Miss Todt notices the book, and after the usual pleasantries are exchanged the two begin to discuss Longfellow and his poetry. Miss Todt, something of a Romantic, describes how she wept when she read Evangeline finding her true love only when he’s dying. Catherina agrees, and explains why she enjoyed The Courtship of Miles Standish better, because it had such a happy ending. The two talk of poetry, the young men they’ve met at church, and the latest women’s fashions. And then Catherina suggests they play the piano together, or Catherina plays while Jennie sings.

I went looking for Catherina Gerhard and Miss Jennie Todt. Given that I bought the book of Longfellow’s poems in St. Louis, my first assumption was that the two women might be from St. Louis. For decades, St. Louis was something of a destination for book collectors, as the libraries from old, established families ended up at book sales and used book stores.

The last names were also significant, I thought; they were German, and Germans settled in St. Louis and Missouri in huge numbers in the mid-19th century. Thousands settled in what is now Hermann, Missouri, the heart of Missouri’s wine industry and known as “Missouri Rhineland” because the river area reminded German immigrants of their own Rhine River valley.

By 1860, some 60,000 native-born Germans lived in what is still known as “Dutchtown” in south St. Louis, the “Dutch” being an American corruption of “Deutsch.” For decades the people who lived there were known as the “scrubby Dutch,” because they considered cleanliness next to godliness and not only swept but scrubbed their front porches clean. If you were German and Catholic, you likely attended St. Anthony of Padua Church. If you were German and Lutheran, you attended either Holy Cross Lutheran Church or Trinity Lutheran Church in nearby Soulard (some years ago we attended a wedding at Trinity, and the church is spectacular). And it was only Germans who lived in this area and attended these churches; the city became home to a considerable number of Bohemian (also German-speaking) immigrants.

The Germans were a powerful influence in the city. They played a crucial role in keeping Missouri in the Union as a border state in 1861 and not seceding with the other slave states. One German, Carl Schurz (1829-1906), would become a Union army general, a U.S. Senator, a U.S. minister to Spain, and Secretary of the Interior. He had also been an editor of the Westliche Post, one of two German-language newspapers published in St. Louis; it would be bought by Joseph Pultizer and combined with another paper to become the St. Louis Post-Dispatch. The Germans brought with them a thirst for beer, and south St. Louis soon became dotted with breweries and beer gardens, one of which eventually became Anheuser-Busch. 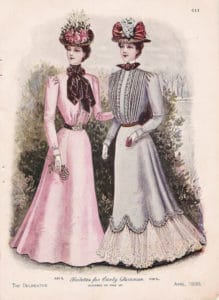 However, I did find one in the New York City area. She was born in 1882, the same year her mother died and so possibly in childbirth; Jennie was an only child. She would have been 18 about the time the calling card was presented to Catherina. Jennie would end up marrying Richard Flemming, a commercial banker in New York City, and they would have only one child, a son. Jennie died in 1940.

Is this Jennie Todt the one whose calling card ended up in a book of Longfellow’s poems? Perhaps. But I can think of variations on the story I imagined, variations including or excluding St. Louis. German immigrants settled in many places in the United States.

I can still see Miss Jenny Todt, accompanied by her mother or an aunt, or perhaps a brother, wearing her full-length dress with its wasp waistline and a new hat, knocking at the door of one of the substantial brick homes in Dutchtown, to meet with a new-found friend named Catherina Gerhard. Catherina, for her part, would have been reading her Longfellow when the maid announced Miss Todt.

A Small Volume of Essays, A Larger World of Poetry

Photo by Holly Norval, Creative Commons, via Flickr. Post by Glynn Young, author of the novels Dancing Priest and A Light Shining, and Poetry at Work.