My paternal ancestors come from a very distinguished group in 18th century British society—the ones removed from debtors’ prisons and dumped off the coast of Georgia. This solved two problems at once; it relieved prison overcrowding and provided settlers for the new American colony.

My mother’s ancestors were a fusion of French colonists in Louisiana and German refugees from Alsace-Lorraine. (The German branch left Alsace after Germany defeated France in the Franco-Prussian War of 1870, which makes me wonder why Germans would leave after a German takeover.) The French side of her family descended from colonists from France and deportees from Acadia in Canada—the people who eventually became known as the Cajuns of south Louisiana. Henry Wadsworth Longfellow about the time he published “Evangeline.”

The Acadians were deported from what is now Nova Scotia in 1755 and dispersed among numerous colonies and countries. The English in charge of the deportation claimed they had a decree from King George II, but no such decree has ever been found. It was more likely an illegal land grab. The Acadians had been in the area since 1604 and had developed prosperous villages and farms. The deportation split families and friends; at least one couple were separated from most of their children. A goodly portion ended up in the French colony of Louisiana, settling in the country to the west and northwest of New Orleans.

By the mid-19th century, the story of the deportation was largely forgotten. And then, in 1840, at a dinner in Boston that included both Nathaniel Hawthorne and Henry Wadsworth Longfellow, a guest told the story of a couple in Acadia separated on their wedding day. The guest urged Hawthorne to consider it for a novel, but he wasn’t interested. 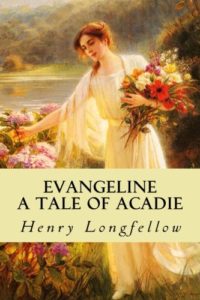 Longfellow, however, was. And seven years later he published his first narrative epic poem, Evangeline: A Tale of Acadie. It was written in unrhymed dactylic hexameter, possibly showing the influence of Longfellow’s reading of Homer.

The poem told the story of Evangeline Bellefontaine, the daughter of the wealthiest farmer in the area surrounding the town of Grand-Pre, and Gabriel Lajeunesse, the son of the blacksmith. They become officially engaged the night before the English have all the village men come to the church for a meeting, which actually happened as part of the deportation.

Then uprose their commander, and spake from the steps of the altar,
Holding aloft in his hands, with its seals, the royal commission.
“You are convened this day,” he said, “by his Majesty’s orders.
Clement and kind has he been; but how you have answered his kindness,
Let your own hearts reply! To my natural make and my temper
Painful the task is I do, which to you I know must be grievous.
Yet must I bow and obey, and deliver the will of our monarch;
Namely, that all your lands, and dwellings, and cattle of all kinds
Forfeited be to the crown; and that you yourselves from this province
Be transported to other lands. God grant you may dwell there
Ever as faithful subjects, a happy and peaceable people!
Prisoners now I declare you; for such is his Majesty’s pleasure!”

The church is surrounded by soldiers and the men are prevented from leaving. Within three days the entire population is marched to the boats. Evangeline’s father dies of shock on the beach; Evangeline and Gabriel are separated. They will only meet again in old age, when Gabriel is dying during a plague. But they will remain faithful and true to each other.

Longfellow’s poem was published in book form in 1847, about the time when the Acadian people in Louisiana were truly coming into their own as a people and a culture. The poem, although fictional, turned their story of exile into a cultural myth. It became his best-known poem during his lifetime, and sold 36,000 copies during its first decade of publication. Critics liked it, but many pointed out that it wasn’t entirely historically accurate. No one cared. 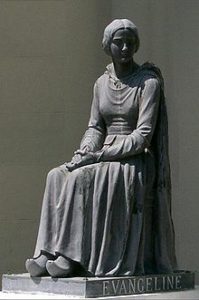 The Evangeline monument to Acadians in St. Martinville, La.

Evangeline also did something that hadn’t been done before in popular American literature—it cast Catholics in a favorable light, depicting men and women as tragic heroes who persevered and remained faithful to each other, their religion, and their sense of being a people.

Longfellow’s poem helped give an identity to a people. But it was a novel that turned Evangeline into a tourist industry.

A Louisiana judge, Felix Voorhies, published the fictional (despite the title) Acadian Reminiscences: The True Story of Evangeline in 1907. It created a huge boom of interest in the story of the Acadians, although it broadly deviated from both the Longfellow poem and the factual history. It and the poem became the basis for several movies, including the 1929 movie Evangeline starring Delores Del Rio and featuring a song written by Al Jolson and Billy Rose.

By the time I was born and in school, more than a century after it was first published, Evangeline had become standard reading in English classes in Louisiana and many other states. In Cajun country, there was a monument to the deported Acadians that was an image of Evangeline. An oak in St. Martinville had been designated the official “Evangeline oak.” There was even a residence hall at LSU, my alma mater, named for the fictional heroine. Only non-resident students had to wonder where the name from; the rest of us knew from our experiences with the poem in school.

A story is told at dinner, a novelist dismisses the idea, a poet takes it forward, and a myth is born that helped to shape a people in the 19th and 20th centuries.

The full text of Evangeline