The first thing you notice about Olio by Tyehimba Jess, which won the 2017 Pulitzer Prize for Poetry, is that it looks like no book of poetry you have ever seen. It’s oversized, 8 by 10 inches, with a plain black-and-beige cover, and more than half an inch thick. It looks less like a poetry collection and more like a workbook.

Open it, and you discover that its difference from traditional books of poetry is even more marked. It has poems, to be sure, and some drawings and photographs, which aren’t unknown in poetry collections. It also has an official cast of characters. It has interviews. Some of the poems are on pages that have to be manually unfolded to be read. And for the pages containing poems designated “Jubilee,” you can read headers and footers of the names and dates of African-American churches. The dates are significant—the year the churches were burned or bombed or suffered other kinds of violence. 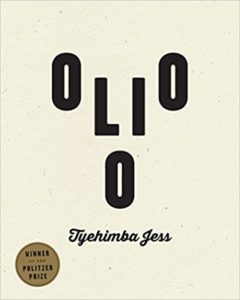 You begin reading Olio and you enter another world entirely. It is poetry, it is journalism, it is history, it is fiction, it is a minstrel show, it is ragtime, it is the blues. Jess has created (or, more precisely, recreated) a world of the first generation of post-slavery African-Americans. He has told their story in a dazzling feat of imagination that fuses music, poetry, and history.

The cast of characters includes familiar names like Scott Joplin, Booker T. Washington, and Paul Laurence Dunbar. It also includes lesser known historical figures like the composer John William “Blind” Boone, opera singer Sissieretta Jones, sculptor Edmonia Lewis, and the Siamese twins Millie and Christine McKoy, who made enough money touring to eventually buy the plantation where they were born. Here is one of the “Blind” Boone poems, in which he (and Jess) tell the story of how he lost his sight. John William “Blind” Boone caught encephalitis at six months.
The treatment was removal of the eyes.

Bless the fever in that night
in the sixth month of my life.
Bless the fever, for it gave me sight;
it swole my brain to fit God’s gift.
It brought the hand that would lift
each eye from my infant skull.
Bless the sweat; my baby bawl.
Bless the horse that hauled
the surgeon through dusk’s dark,
half drunk and swearing, into mine.
Bless the flame—it sterilized
the metal of the spoon. Bless
the path between lid and bone,
slipped and slid by that instrument
of my deliverance from sight. Bless
the handling of the knife. Bless
that night that gave me night,
wrapped it ’round my bloody
face, whispered how I could be
grace notes, arpeggios, a piano roll
of sound copying each note
from everything around me.
You see, I’m sure at first
there was the hurt
and the scalding pain.
But then again, bless
an infant’s too short
memory. All I know is
what lies behind light.
I’ve learned this is what’s right
for this one right here. Yes, bless
the fever, then listen close.
Spare an ear to this piano
and shut your eyes closed…

Threaded throughout Olio are a series of invented letters and interviews from the 1920s by the fictitious Julius Monroe Trotter. Trotter, who served in World War I  in the 369th Infantry Regiment in the U.S. Army, was grievously wounded, and wears a mask over his head to hide his facial disfigurement. He is trying to learn the story of Scott Joplin, and he interviews a wide array of people who knew the ragtime composer and pianist. 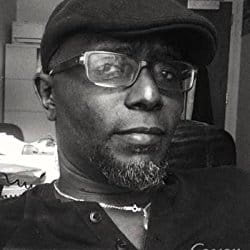 Jess is the poetry and fiction editor of African American Review and an associate professor of English at College of Staten Island. He received his B.A. degree from the University of Chicago and his M.F.A. degree from New York University. He has published a previous collection of poems, leadbelly: poems (2005), and has been recognized with a wide array of prizes and recognitions.

The title Olio suggests that this work is a hodgepodge. Jess himself includes that as one of the definitions of “olio” at the beginning of the book. But it is also “the second part of the minstrel show which featured a variety of performance acts and later evolved in vaudeville.”

That may have been the inspiration for Jess undertaking and completing this work, but Olio is no hodgepodge. It is carefully researched and constructed with intent and purpose. Jess is bending poetry out of its familiar groove, to tell and re-tell a story that few Americans know. And it is a story that needs to be told.

Photo by Mike Dierken, Creative Commons, via Flickr. Post by Glynn Young, author of the novels Dancing Priest and A Light Shining, and Poetry at Work.