Let Them Eat Chaos by British poet Kate Tempest includes a note at the beginning: “This poem was written to be read aloud.” And you think, “Well, aren’t most poems meant to be read aloud?” Perhaps, but Tempest is making at least three points with that statement.

First, reading a poem aloud is not a given; most poems are read silently today, as opposed to being read aloud. Reading aloud assumes (or presumes) an audience.

Second, this single collection-length poem was written specifically with the idea of being read aloud.

And third, reading aloud is a performance, which is exactly what you would expect from a poet who is also a playwright, and also a recorder of CDs (including rap). In fact, Let Them Eat Chaos is paired with an audio CD of the same name.

Tempest doesn’t blur the lines between artistic forms; she blows them up.

Let Them Eat Chaos is a single long poem about seven Londoners living on the same street. They don’t know each other; their lives never intersect. They have much in common, but they will never know that. Instead, they move about their atomized lives, unaware of each other, and often unaware about what matters most in their lives.

Excerpt from Let Them Eat Chaos 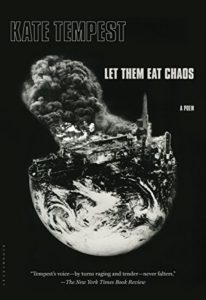 At any given moment in the middle of a city
there’s a million epiphanies occurring,
in the blurring of the world beyond the curtain

and the world within the person
There’s a quivering.
The litter in the alleyway is singing.

People meet by chance, fall in love, drift apart again.
Underage drinkers walk the park and watch the dark descend.
The workers watch the clocks, fiddle with their Parker pens
While the grandmothers haggle with the market men.

Here, where the kids play and laugh until they fall apart,
it’s kiss-chase and dancing
till it’s mistakes and darkened rooms.
Too fast too soon
too slow too long
We move around all day
but can’t
move
on

Is anybody else awake?
Will it ever be day again? Tempest is the author of two plays, Wasted (2013) and Hopelessly Devoted (2014); two poetry collections, Hold Your Own (2015) and Let Them Eat Chaos; and a novel, The Bricks That Built the Houses (2016). She won the Poetry Society’s Ted Hughes Award for innovation in poetry for 2012. The award was given for her play Brand New Ancients, which the award judges called “a poem standing up.”

Always jarring, without a fixed point except for a rather drifting aimlessness, Let Them Eat Chaos blends poetry and performance into something that is simultaneously disconcerting and fascinating. It’s like watching a familiar building burning.

The Guardian’s review of Let Them Eat Chaos

“Kate Tempest’s poetry is simply no good” by The Spectator

Photo by Ethan M. Long, Creative Commons, via Flickr. Post by Glynn Young, author of the novels Dancing Priest and A Light Shining, and Poetry at Work.