The biblical story of Abraham, Sarah, and Hagar is well known. God promises Abraham he will be a great nation, but his wife, Sarah, because of her advanced age, is doubtful. She gives Hagar, one of her servants, to Abraham, thinking that’s where the great nation will come from. Hagar promptly gets pregnant and later gives birth to Ishmael. Then Sarah gets pregnant, and has Isaac. Abraham eventually faces rivalry in the camp, until Sarah convinces him to expel Hagar and her son, forcing them into the desert to (presumably) die.

But they don’t. God hears her cries as they’re dying, and sends an angel to rescue them and point to water. The Jewish people will descend through Isaac, and the Arab people through Ishmael. The rivalry in the camp becomes the rivalry lasting to the present day.

This is the story from the Book of Genesis in the Bible, but the Quran contains a similar account. Poet and writer Mohja Kahf uses both accounts to weave Hagar Poems, her new collection published this year.

She does more than weave stories, however. She also tells them. She moves Abraham, Sarah, and Hagar back and forth across centuries. She includes poems by Sarah. She positions Hagar at an AIDS march. She has Abraham expressing doubts about his actions. She has Hagar talking with her therapist, and her therapist taking notes. You’ve got this Hagar thing all wrong
It’s mythic. You’re stuck
at left-wing literal levels
of rage-for-justice rhetoric
and knee-jerk feminist bludgeoning
Go get your Jung and Ibn al-Arabi;
What is the Hagar function in the psyche?
Here we have the angel and the baby;
here, two wives, two brothers,
a doppelganger story.
It’s all interior, desert and city,
mountain and well.
Take it from history;
wake up and jot down the latest jigsaw clue:
All the characters in the Hagar dream are you.

A note on the references: Carl Jung (1875-1961) is the founder of analytical psychology and Abu Bakr Ibn al-Arabi (1076-1148) was an Islamic legal scholar interested in questions of the human soul. This is one of several poems where Kahf envisions Hagar receiving therapy.

Collectively, Hagar Poems results in a brilliant retelling of the biblical story, one that is at once both ancient and contemporary. 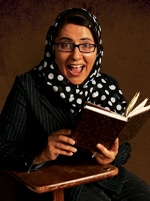 The second section of the book are poems drawn largely from Quranic texts about Moses and his mother, Pharaoh’s daughter who finds Moses, Mary learning she is pregnant with Jesus, and then subjects largely related to solely Islamic stories. The entire collection contains “64 plus” poems – the “plus” being several pages of short poems at the end grouped under the general heading of “Little Mosque Poems.” The “Hagar Poems” section is comprised of 29 poems.

Kahf was born in Damascus, Syria, in 1967, and received her Ph.D. in comparative literature from Rutgers University. She is currently an associate professor of comparative literature at the King Fahd Center for Middle East and Islamic Studies at the University of Arkansas-Fayetteville. Kahf is also the author of a novel, The Girl in the Tangerine Scarf (2006) and a 2003 poetry collection, E-mails from Scheherazad.

Hagar Poems surprised me, delighted me, and taught me, helping me to understand the story in unfamiliar ways.

Photo by mypubliclands, Creative Commons, via Flickr. Post by Glynn Young, author of the novels Dancing Priest and A Light Shining, and Poetry at Work.