I first read Spoon River Anthology in high school, junior year, in fact, the year we all took American literature (paired with American history). Our teacher, Mrs. Prince, was a larger-than-life character who spoke in breathless superlatives and occasional exuberant shouts. She told us that Jacqueline Susann’s Valley of the Dolls was the greatest American novel ever written; it had been published the previous year.

She loved American literature, however, and she was wildly enthusiastic about Huckleberry Finn (apparently is was almost as good as Valley of the Dolls) and Walt Whitman. But when she introduced us to the Realists (Edith Wharton, Jack London, Willa Cather) and the early Modernist poets (Eliot, Vachel Lindsay, Sara Teasdale, and others), I believe I fell in love with literature. Masters was born in Kansas but moved at a young age with his family to Lewiston, Illinois, whose Oak Hill Cemetery furnished the setting for the poems. His love was literature and poetry, but he trained as a lawyer, and moved to Chicago to practice. For several years he was the law partner of Clarence Darrow. He published a few collections but without much notice or success. In 1914, Marion Reedy, editor of Reedy’s Mirror in St. Louis (and a promoter of Carl Sandburg and Sara Teasdale, among others), published several of Masters’ poems, which were noticed by Harriet Monroe of Poetry Magazine. She helped Masters assemble the collection that became Spoon River Anthology. It was an almost overnight sensation and national bestseller.

What it did was simple. At a time of industrialization and burgeoning growth of the cities, it reminded people that their romantic notions of small-town life were more nostalgia than reality.

I reread the work in the early 1990s, about 25 years after first reading it. I was still fascinated by the picture it painted, the stories it told, and the concise way it told those stories, so that a few short lines of verse unfolded a person’s life. 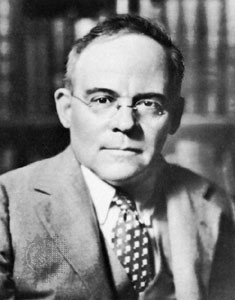 And a few weeks ago came my third reading. What strikes me forcefully now that didn’t strike me as much in the two previous readings is how dark the work is. The stories told by the tombstone inscriptions are largely stories of sin, failure, crime, and the sense of profound loss. A few are positive, but most of the poems are about untimely death, lost love, murder, industrial and work fatalities, political corruption; hypocritical ministers, women who die having abortions and the doctors who perform them, unhappy marriages, and general misery.

What also strikes me is the connections between groups of poems, so that we see the same events through different, often completely different, perspectives. Overall, the poems offer a dark view of small-town life, and a dark view of humanity.

Here is one I missed, or didn’t remember, from the first two readings, the one that might summarize Masters’ own experience as a poet. Masters would eventually give up his law practice and move to New York City to write full time. He wrote more poetry, an autobiography, and non-fiction works, but never again achieved the fame he gained with Spoon River Anthology. Still, to have achieved what he did with this work was sufficient enough. More than a hundred years later, it still speaks to us of the human condition.