I thought the United States had the hammerlock on extreme political language until the Brexit referendum was decided in Great Britain. Then I discovered we were amateurs when it came to the normally understated British. I had British friends on both sides of the decision for Britain to leave the European Union. The anguish was painful to see, mirrored, perhaps, by the anguish we face this election year in the U.S.

So I turned to British poetry, as did the British papers. The British take their poetry much more seriously than Americans do. I happened to visit last year during National Poetry Day, and the entire country seemed to be reading poetry, going to readings, and holding poetry book fairs. And British newspapers still print poetry, review it, discuss it, and debate it. And it lasted longer than a single day—it was more like National Poetry Week.

Can you imagine a major network, like NBC or Fox, holding a national vote on America’s favorite poets? In 2014, the BBC did, with plenty of rules and guidelines. Some 18, 000 votes were cast, and first place went to Anglo-American T.S. Eliot. John Donne was in second place; Benjamin Zephaniah was third. Rounding out the Top 10 were Wilfred Owen, Philip Larkin, William Blake, William Butler Yeats, John Betjeman, John Keats, and Dylan Thomas. 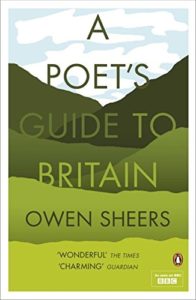 In 2009, poet and novelist Owen Sheers was asked to select and write the introduction to the poems that would comprise A Poet’s Guide to Britain. The book wasn’t so much a travelogue with poetic reminders and lines as it was a collection of British poetry that focused largely on landscape. Sheers organized the poems into six categories: London and Cities; Villages and Towns; Woods and Forests; Mountains and Moorland; Islands; and, Coasts and Sea. These categories, of course, are more than landscape; in many ways, landscape is Britain, and has always defined British history, culture, politics, and people. Landscape was also a defining feature of the Brexit vote.

Sheers included familiar poems and poets, like Eliot, Shelley, Keats, Tennyson, and Thomas Gray; several poems by Eliot; and several of the World War I poets, among many others. But he also included a number of lesser known poets (at least lesser known outside of Britain). Poet Norman Nicholson (1914-1987) is an example.

Nicholson was long associated with the town of Millom in Cumbria near the Lake District. He never lived in London (like most British poets do at some point in their lives). His poetry was praised by such poets as Eliot and Ted Hughes. And Eliot, in fact, was Nicholson’s publisher at Faber & Faber. Here is one of the Nicholson poems included by Sheers that is simply beautiful in the emotions it evokes. Look
Along the well
Of the street,
Between the gasworks and the neat
Sparrow stepped gable
Of the Catholic chapel,
High
Above the tilt and crook
Of the tumbledown
Roofs of the town-
Scafell Pike,
The tallest hill in England.

How small it seems,
So far away,
No more than a notch
On the plate-glass window of the sky!
Watch
A puff of kitchen smoke
Block out peak and pinnacle –
Rock-pie of volcanic lava
Half a mile thick
Scotched out
At the click of an eye.

Look again
In five hundred, a thousand or ten
Thousand years:
A ruin where
The chapel was; brown
Rubble and scrub and cinders where
The Gasworks used to be;
No roofs, no town,
Maybe no men;
But yonder where a lather rinse of
cloud pours down
The spiked wall of the sky-line, see,
Scafell Pike
Still there.

And yes, there is even a Norman Nicholson Society with a website devoted to celebrated and publicizing his poetry.

The British also have their favorites poems. In 1995, a book program on the BBC sponsored a contest on Britain’s favorite poems. The following year, the BBC published the hundred with the most votes under the title of The Nation’s Favourite Poems, with a forward by Welsh actor and author Griff Rhys Jones. Since then, the book has been reprinted 44 times.

Think about that: reprinted 44 times.

Contemporary poets may sniff a bit at some of the poems. Several are rather old-fashioned and sentimental; many of the poems express yearning and have almost a winsome quality about them.

These are the top 10 in the collection, starting with the poem receiving the most votes: If by Rudyard Kipling

The Lady of Shalott by Alfred Lord Tennyson

Not Waving But Drowning by Stevie Smith

I Wandered Lonely as a Cloud, by William Wordsworth

To Autumn, by John Keats

The Lake Isle of Innisfree, by W.B. Yeats

Ode to a Nightingale by John Keats

He (Aedh) Wishes for the Cloths of Heaven, by W.B. Yeats

Argue with their choices, but the results (and the vote itself) underscore the importance of poetry in Britain.

Included in both books is the poem that kept coming to mind while I read story after story about Brexit. The poem is about something lost and perhaps something found, and it is the quintessential English poem: “Dover Beach” by Matthew Arnold. The sea is calm tonight.
The tide is full, the moon lies fair
Upon the straits; on the French coast the light
Gleams and is gone; the cliffs of England stand,
Glimmering and vast, out in the tranquil bay.
Come to the window, sweet is the night-air!
Only, from the long line of spray
Where the sea meets the moon-blanched land,
Listen! you hear the grating roar
Of pebbles which the waves draw back, and fling,
At their return, up the high strand,
Begin, and cease, and then again begin,
With tremulous cadence slow, and bring
The eternal note of sadness in.

Sophocles long ago
Heard it on the Ægean, and it brought
Into his mind the turbid ebb and flow
Of human misery; we
Find also in the sound a thought,
Hearing it by this distant northern sea.

The Sea of Faith
Was once, too, at the full, and round earth’s shore
Lay like the folds of a bright girdle furled.
But now I only hear
Its melancholy, long, withdrawing roar,
Retreating, to the breath
Of the night-wind, down the vast edges drear
And naked shingles of the world.

Ah, love, let us be true
To one another! for the world, which seems
To lie before us like a land of dreams,
So various, so beautiful, so new,
Hath really neither joy, nor love, nor light,
Nor certitude, nor peace, nor help for pain;
And we are here as on a darkling plain
Swept with confused alarms of struggle and flight,
Where ignorant armies clash by night.

Arnold published that poem in 1867. I think he may have captured the British spirit, and something of the British soul. And I’m confident the British will sort the Brexit business.

Photo by Darren Harmon, Creative Commons, via Flickr. Post by Glynn Young, author of the novels Dancing Priest and A Light Shining, and Poetry at Work.

Ukip’s Steven Woolfe reads out his own pro-Brexit poetry, then wells up as he thanks Nigel Farage

I’ve got the Brexit blues. Can anything make me feel better?

Poet Andrew Motion’s poem about the EU referendum: “In the Air”