Perhaps it comes from having a long, rather unexpected career as a speechwriter, but I tend to listen carefully to spoken language, both in real time and through various media reports of what people have said. You might imagine that the presidential election cycle sends my brain into overdrive, as if someone is pouring political phraseology through large funnels into both ears.

My solution is to not watch or listen, or at least not listen much. Language and how it’s used is important to people who write speeches as well as other things, and language does not usually fare well during political seasons. It even spills over into sports. Do you know that according to Wired Magazine, if you go anywhere near the Super Bowl you will be “surveilled” hard? And I think that, without having watched a single political debate all the way through, I can tell you the “message points” of all the candidates.

My preoccupation with language came to mind while reading Danniel Schoonebeek’s first poetry collection, American Barricade. It’s an unusual collection: the poems are unusual, the structure is unusual, and the close blending of the personal and social is unusual. That said, Poets & Writers called it one of the 10 best collections published in 2015, the Poetry Foundation has awarded Schoonebeek a Ruth Lilly and Dorothy Sargent Rosenberg Poetry Fellowship, and the collection has been widely praised as one likely to influence poetry for some time to come.

In these 58 poems, Schoonebeek alternates between what one might call social poems and personal poems (the personal poems are called “family album”). And the personal become the social, and the literary and social become the personal. Threaded through all of the poems is how he uses language—incomplete thoughts, incomplete sentences that may or may not finish in the next line. At first it’s disconcerting, and then comes understanding. Here’s an example: My god can he hide a nickel.

My god his tooth is gold and like a bullet.

And do you see the way the coin.

When he touches its face it disappears.

And if he takes my hands, which I was saving.

If I place them on his table, which collapses.

It is almost too bright now, this setting.

This west where I have still not heard my numbers.

It is almost Black Friday.

And may I thank you for the ticket that wins nothing.

For the bag of mint too rotten to eat.

May I thank you for your death, and for your clothing.

When the door disappears, and the siren begins.

And my god if I could push my way past you. 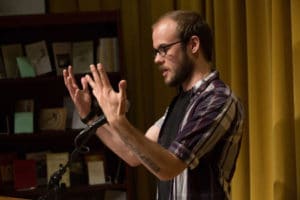 Schoonebeek’s poems have appeared in Poetry, Iowa Review, Boston Review, Indiana Review, Guernica, The New Yorker, and Kenyon Review, among others, and in several anthologies. In addition to his fellowship, he’s received a number of awards and honors. His second collection of poems, Trebuchet, was a winner of the 2015 National Poetry Series and will be published this year by University of Georgia Press. C’est la guerre, a collection of poetry, travel articles, and reflections, is scheduled for publication in 2017 by Poor Claudia Press. He hosts the Hatchet Job poetry series in Brooklyn and is an editor of the PEN Poetry Series.

American Barricade is not easy or light reading. It requires close attention. It often requires rereading the poems. The poems are not what many would call “beautiful” but they are certainly what I would call “important” poems. The collection is important for what Schoonebeck says in it. And what he says is that language matters.