In 1912, poet Robert Frost (1874-1963) and his family moved to England. His writing career was not happening in the United States, and a flip of a coin made the decision for England instead of Canada. It was in England that he was finally offered a contract by a British publisher. The resulting book caught the attention of a British poet and literary journalist, Edward Thomas (1878-1917), and Frost and Thomas became good friends. 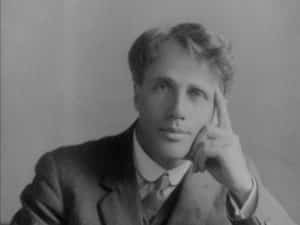 Frost sent Thomas a poem, entitled “Two Roads, ” which Frost thought of as a kind of joke about Thomas’s indecision and a parody on the romantic imagination.

They often took walks in the countryside together, and Frost was often amused by his friend’s indecision as to which walking route to take, and then to regret the one chosen. Frost later sent Thomas a poem, entitled “Two Roads, ” which Frost thought of as a kind of joke about Thomas’s indecision and a parody on the romantic imagination. For his part, Thomas seemed not to realize it was meant as a joke, and took it quite seriously, as the exchange of letters between the two indicates.

Thomas eventually enlisted in the British Army, and died in 1917 in France. Today he’s known as one of the World War I poets. Frost went on to become, more than anyone else, the “American Poet.” And his poem, “Two Roads, ” was renamed, and became “The Road Not Taken, ” perhaps the best known American poem of the 20th century, and perhaps the best known American poem, period.

Two roads diverged in a yellow wood,
And sorry I could not travel both
And be one traveler, long I stood
And looked down one as far as I could
To where it bent in the undergrowth;

Then took the other, as just as fair,
And having perhaps the better claim,
Because it was grassy and wanted wear;
Though as for that the passing there
Had worn them really about the same,

And both that morning equally lay
In leaves no step had trodden black.
Oh, I kept the first for another day!
Yet knowing how way leads on to way,
I doubted if I should ever come back.

I shall be telling this with a sigh
Somewhere ages and ages hence:
Two roads diverged in a wood, and I—
I took the one less traveled by,
And that has made all the difference. In The Road Not Taken: Finding America in the Poem Everyone Loves and Almost Everyone Gets Wrong, author David Orr tackles this most famous poem and argues, convincingly, that it is not only the best known American poem, it is also the most misunderstood poem.

And it’s misunderstood for the simple reason that it doesn’t say what we think it says. The poem is actually far more complex than what so many of us have heard in countless graduation ceremonies. And there is essentially no difference between the two roads.

Orr is a poetry columnist for The New York Times Book Review and a professor at Cornell University. His first book, Beautiful & pointless: A Guide to Modern Poetry, was published in 2011 (and we reviewed it here at Tweetspeak Poetry). He brings a wealth of perspective, ranging from history and poetry to the science of the brain, to the subject of this poem.

He considers the poet, who Frost was (and wasn’t), his biography, and the biographical context for the poem. He then analyzes the poem itself, asking what in hindsight look like obvious questions. He then discusses the choice of roads, the whole notion of choice and its place in the American psyche and the idea of roads as opposed to paths. Finally, he examines the chooser, who it is who’s confronted with the choice of roads.

Orr notes that readers were captivated by the “thrill of sincerity” they found in Frost’s poetry. “The perception of authenticity became Frost’s trademark, at least among general readers, ” he writes. His looming presence in American poetry, reaching its height in the 1950s and especially with the inauguration of President Kennedy in 1961, at which Frost started to read a poem he had written for the occasion and then discarded it, reciting another (and better) one from memory.

That presence barely survived his death. In the iconoclastic 1960s and 1970s, Frost’s reputation suffered greatly, first at the hands of his official biographer and then at the hands of academics. He became known as a “monster, ” Orr writes, on the basis of very little evidence. But “The Road Not Taken” fared better, and continued as a staple in school graduations. The academics may have sniffed at Frost, but he was still loved by general readers.

One hundred years after its first publication (August marked the centennial), “The Road Not Taken” remains a beloved American poem. Even with its contradictions and misunderstandings, it remains an important of the American poetic landscape.

Photo by Daniele Zedda, Creative Commons, via Flickr. Post by Glynn Young, author of the novels Dancing Priest and A Light Shining, and Poetry at Work.