Two poetic voices are featured this week – one that uses physical form to underscore the theme, and other that uses the metaphor of flowers to apply to relationships and life.

What the reader immediately notices with The Arranged Marriage by Jehanne Dubrow is the form of the poems – each of the 54 poems is line-justified, suggesting a very tight control of the form. That virtually all of the poems relate to the poet’s mother, tied to this tight controlling form, serves to heighten and enhance the theme of an arranged marriage, including overtones of violence and abuse. Even something as seemingly innocent as a photograph of a child playing dress-up becomes something unsettling. Some devil has turned her double agent.
She’s dancer of the seven veils, high
priestess of the cha-cha-cha. Come
hither, says the camera. Come kiss me,
says the girl. And never mind the
questions—who linked the silver chain
around her waist? Who cuffed her arm?
who shot the photograph? Call her
bohemian. Call her the kind of trouble
that tastes like chocolate, so sweet it
doesn’t matter what she stains. Call her
a danger sharpest to herself. A femme
fatale. A firing squad. She’s bugle beads
and red chiffon, unraveling. Costume
makes a courtesan. Costume makes the
little mouth a place for poison, for
swallowing a string of pearls.

The poet is examining her mother’s life, and it is not a warm and embracing picture that she describes.

Dubrow is the author of five previous collections of poetry: The Promised Bride (2007), The Hardship Post (2009), From the Fever World (2009), Stateside (2010), and Red Army Red (2012) (some of the titles suggest Dubrow’s upbringing by diplomatic parents assigned to several countries around the world). She’s received a number of poetry awards and recognitions.  She’s an associate professor of creative writing at Washington College in Maryland, serves as director of the Rose O’Neill Literary House there, and is the founder and editor of the Cherry Tree literary journal. Her poems have been published in a number of literary and poetry journals.

The Arranged Marriage is a fascinating collection, a telling combination of form and substance.

Also a resident of Maryland (although a North Carolinian by birth), Sally Rosen Kindred employs the metaphor of flowers in many of the 39 poems in her latest poetry collection, Book of Asters. Asters are there, to be sure (including the title poem), but so are Sweet William, sunflowers, zinnias, cornflowers, daffodils and even dandelions. She uses flowers to illustrate relationships, situations (like dandelions taking over a lawn – a wonderful poem, especially for us suburbanites), and memory, especially childhood memory.

Here is how she uses daffodils in an incredibly sensuous way: 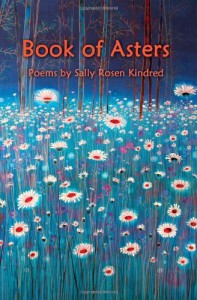 That Gray Sheet, That Song

This is how we love, on a gray sheet
in the day’s late bed. You lay
three fingers across my ghost hip.
They curl and drift below my ribs,
where nothing grows
for long. I turn. This is how
an instrument makes sound:
at the end of a horn, lips flare.
Your bones’ tough blues and wit
climb through my years. Ours
is that song: brass, spare—
cut daffodil, stem in blue glass. You wish,
I miss: this music shines, rises
through the flower, out
the gold hour’s mouth: ours
is that trumpet, that kiss. I don’t think I will ever look at a daffodil in quite the same way again.

Kindred is the author of No Eden: Poems (2011) and two poetry chapbooks, Garnet Lanterns (2006) and Darling Hands, Darling Tongue (2013). She received a number of fellowships and recogitions for her work, which has been published in Quarterly West, Blackbird, Hunger Mountain and other journals, and two anthologies.

The poems of Book of Asters can be read in a garden, but they create an intriguing garden of their own.

Photo by jamjar, Creative Commons, via Flickr. Post by Glynn Young, author of the novels Dancing Priest and A Light Shining, and Poetry at Work.

How to Read a Poem: Based on the Billy Collins Poem “Introduction to Poetry” uses images like the mouse, the hive, the switch—to guide readers into new ways of understanding poems. Excellent teaching tool. Anthology included.