It’s September, 2012. We’re on vacation in London, and I’m on my second visit to the Tate Modern. My first visit, two days earlier, was simply to see the collection and the museum’s incredible interior space (the Tate Modern occupies what was formerly a large power plant on the Thames River). This second visit is to see the current exhibition – Edvard Munch: The Modern Eye.

The exhibition does not include the only Munch painting with which I’m familiar – The Scream. The reason is that the exhibition covers only Munch’s 20th century works (including experimental photographs). The Scream, all five or so versions of it that he painted, dates from about 1895. That’s something I learn from the exhibition. Munch (1867-1944) returned to the same themes over and over again, and not only with The Scream. The Sick Child (likely based on the experience of his sister) and The Girls on the Bridge are two other subjects that he returned to again and again. He also painted women, in all stages of dress and undress. And mundane events like men walking to work and more sensational events like house fires also inspired his painting.

Two years later, on another London vacation and browsing the Tate Modern’s shop, I find The Private Journals of Edvard Munch: We Are Flames Which Pour Out of the Earth, edited and translated by J. Gill Holland.

Edvard Munch wasn’t only an artist. He was also a poet. Poetry is the primary form he used for notes observations, reflections and ideas he wrote in his private journals. He wrote about the women he painted, and women in general (long poems about women; really long poems). He wrote about fellow painters. And he wrote about his own paintings. This is what he wrote about The Scream:

One evening I was walking
out on a hilly path
near Kristiania—
with two comrades. It
was a time when life
had ripped my
soul open. The sun was going down—had
dipped in flames
below the horizon.
It was like
a flaming sword
of blood slicing through
the concave of heaven.
The sky was like
blood—sliced with
strips of fire
—the  hills turned
deep blue
the fjord—cut in
cold blue, yellow, and
red colors—
The exploding
bloody red—on
the path and hand railing
—my friends turned
glaring yellow white—
—I felt
a great scream 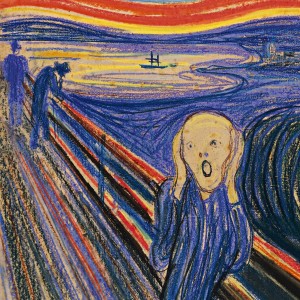 —and I heard, yes, a great
scream—
the colors in
nature—broke
the lines of nature
—the lines and colors
vibrated with motion
—these oscillations of life
brought not only
my eye into oscillations,
it brought also my
ear into oscillations—
so I actually heard
a scream—
I painted
the picture Scream then.

Not all of the poems are so detailed about his paintings and yet, collectively, they are all about his art and his work (the journals also include a number of pen-and-ink drawings and his observations about them). But we are dealing with art here, and art may be true without being factually true. And so it is with Munch’s writings in his journals; he himself warned that the journals were both fact and fabrication.

But the poems also stand on their own. As Holland, professor emeritus of English at Davidson College in North Carolina says in his introduction, “It is not necessary to read Munch’s journal entries simply as a verbal reflection of his visual art. These stories and meditations stand on their own in the European literary world of the late nineteenth and early twentieth centuries.”

Thinking back to the Tate Modern exhibition, I can recall being overwhelmed by the breadth of the works assembled for the exhibition. Munch would have been pleased, I think. As he writes in one of his journal entries:

It suits
my pictures to hang together; they
lose something displayed with
others.

Photo by fOtOmoth, Creative Commons, via Flickr. Post by Glynn Young, author of the novels Dancing Priest and A Light Shining, and Poetry at Work.