You think you everything there is know about Christmas poems, and then you find out you don’t.

Until fairly recently, it was believed that the most famous Christmas poem of all – A Visit from St. Nicholas – was written by poet Clement Clark Moore (1779-1863). Later scholarship has suggested the real author to be Henry Livingston Jr. (1748-1828), a farmer, surveyor and justice of the peace in New York who joined the Revolutionary Army in 1775.

What we do know for certain is that Moore read the poem to his children for Christmas in 1822, and it was published anonymously in 1823 in the Troy (NY) Sentinel. The Sentinel editor did not know who the author was, only that it had been sent anonymously to him in the mail. And we know this poem, more than any other account, fixed forever many of the characteristics attributed to Santa Claus. The poem was published in many publications (copyright laws being what they were), until a bound and illustrated version appeared in 1848.

And then you discover how many poets have written Christmas poems. The answer is: a lot.

The kings they came from out the south,
All dressed in ermine fine;
They bore Him gold and chrysoprase,
And gifts of precious wine.

The shepherds came from out the north,
Their coats were brown and old;
They brought Him little new-born lambs—
They had not any gold.

The wise men came from out the east,
And they were wrapped in white;
The star that led them all the way
Did glorify the night.

The angels came from heaven high,
And they were clad with wings;
And lo, they brought a joyful song
The host of heaven sings.

The kings they knocked upon the door,
The wise men entered in,
The shepherds followed after them
To hear the song begin.

The angels sang through all the night
Until the rising sun,
But little Jesus fell asleep
Before the song was done.

In the bleak midwinter by Christina Rossetti

Our God, Heaven cannot hold Him, nor earth sustain;
Heaven and earth shall flee away when He comes to reign.
In the bleak midwinter a stable place sufficed
The Lord God Almighty, Jesus Christ.

Angels and archangels may have gathered there,
Cherubim and seraphim thronged the air;
But His mother only, in her maiden bliss,
Worshipped the beloved with a kiss.

The Magi by William Butler Yeats

Now as at all times I can see in the mind’s eye,
In their stiff, painted clothes, the pale unsatisfied ones
Appear and disappear in the blue depths of the sky
With all their ancient faces like rain-beaten stones,
And all their helms of silver hovering side by side,
And all their eyes still fixed, hoping to find once more,
Being by Calvary’s turbulence unsatisfied,
The uncontrollable mystery on the bestial floor.

Cards in each mailbox,
angel, manger, star and lamb,
as the rural carrier,
driving the snowy roads,
hears from her bundles
the plaintive bleating of sheep,
the shuffle of sandals,
the clopping of camels.
At stop after stop,
she opens the little tin door
and places deep in the shadows
the shepherds and wise men,
the donkeys lank and weary,
the cow who chews and muses.
And from her Styrofoam cup,
white as a star and perched
on the dashboard, leading her
ever into the distance,
there is a hint of hazelnut,
and then a touch of myrrh.

Photo by Chris Wolff, Creative Commons, via Flickr. Post by Glynn Young, author of the novels Dancing Priest and A Light Shining, and Poetry at Work. 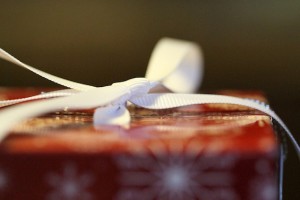 Give the Gift of Every Day Poems

We’ll send a special gift card for Every Day Poems, and then get the subscription started. So your friend or loved-one can find some beauty in their inbox! 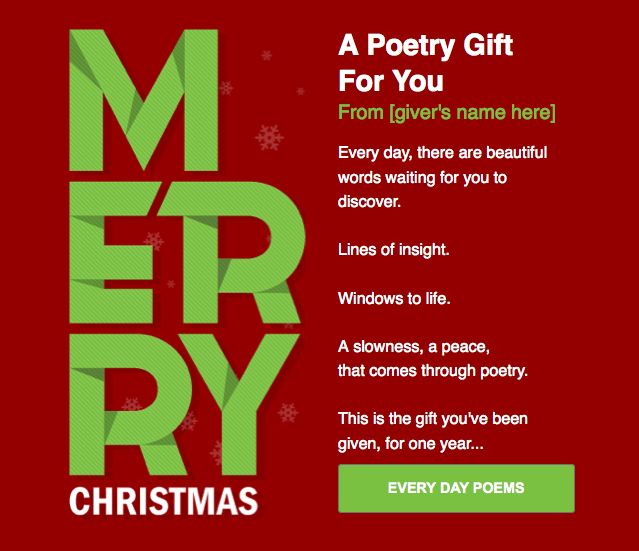