It’s about relationships, whether the subject is an antiquated law about maimed people, a recipe for tilapia, even flower arranging.

Welcome to The Book of Goodbyes: Poems by Jillian Weise.

It’s a notable volume, and not only because it was the 2013 winner of the James Laughlin Award for best second book of poetry from the Academy of American Poets. Weise’s first was The Amputee’s Guide to Sex (2007), the title of which tells you at least some of what you might expect in The Book of Goodbyes. 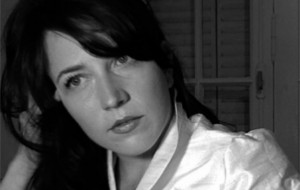 A law about maimed or disfigured  people (they used to be called “ugly laws” and that’s the title of one of Weise’s poems) is not a figment of the poet’s imagination; the last such law was repealed by Chicago in 1974. Such people were not to be allowed on the streets.

Weise is abrupt, occasionally shocking, and free in her use of language including profanity, which sometimes sneaks up on you when you don’t expect it. Or sometimes you do expect it and it’s missing in action. Weise keeps you guessing, and not only with language. You’re never quite sure where she’s going to take you.

The Book of Goodbyes is structured like a two-act play, including a titled intermission and an official curtain call. It could simply be an organizing device for the poems. I suspect the structure is designed to suggest we’re attending a play; in fact, we’re part of the play. The language of the poems is urgent and compelling enough to pull us right into the poems themselves. Up Late and Likewise

It never stopped raining when I was with him
and we were wet and there were parties.
He was from another decade. It was honest.

With some you never can tell but with him
I could. My decade let the POWs come home.
What did you decade do? The thing about him is

he keeps being the thing. You could never
count on him. I did. It never stopped raining
and I could, it was honest, tell.

The section entitled “Intermission” includes three longish poems – about two finches in a cave on the Argentine side of Iguazu Falls. The poems are actually much more engaging than that brief summary might imply; the poems use finches but they, like the other poems in this volume, are about relationships, human relationships.

The final poem, the only one included in the section entitled “Curtain Call, ” is “Elegy for Zahra Baker.” It’s a prose poem about a missing child, based on a real case in North Carolina in 2010. It’s an angry poem. It should be.

The Book of Goodbyes, is sometimes raw, sometimes searing, but always arresting and always honest. Even the finches.

Photo by Edward Conde, Creative Commons via Flickr. Post by Glynn Young, author of the novels Dancing Priest and A Light Shining,  and Poetry at Work.