They say all publicity is good. For poet Allen Ginsberg (1926-1997), the publicity he received for the publication of Howl and Other Poems permanently defined his career.

It is 1955. Ginsberg has written a long poem he’s entitled “Howl” about capitalism and “the system.” In fact, the poem is a long “howl” about the system,  filled with vivid imagery, including quite graphic sexual imagery. 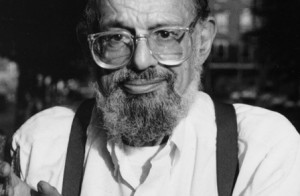 But some copies show up at the bookstore, and an undercover police officer gets the manager to sell him one. The manager and publisher Ferlinghetti are eventually hauled into court on obscenity charges. Finally, in 1957, the California State Superior Court judge finds that the work has redeeming social importance.

Ginsberg’s name is made. He becomes a kind of poetic icon for protest. He continues to be known for causes involving protests—the Free Speech movement, Vietnam War, gay rights, and more. He shares the National Book Award for poetry with Anne Waldman in 1974, among other honors. He is a finalist for the Pulitzer Prize for poetry in 1995.

But before is anything else, Ginsberg is a Beat Generation poet. He is part of the San Francisco Renaissance. He is close friends with Jack Kerouac, having met him when he started Columbia at 17 in 1943.

And he is the poet of Howl. Reading Howl today, almost 60 years after it was written, is an undertaking resulting in mixtures of wonder, shock, and exhaustion (just reading it is exhausting). The passages that formed the subject of the obscenity trial are woven throughout the poem. They’re still rather shocking, even for today’s culture.

Howl shouts. It screams. It is a rant. It bleeds raw emotion. To answer the inevitable question “why do you hate America so much, ” I would say it’s because Ginsberg cared so much.

The entire text of Howl is available at the Poetry Foundation. The first stanza, the longest in the poem, is one sentence. This is how the poem begins:

I saw the best minds of my generation destroyed by madness, starving hysterical
naked,
dragging themselves through the negro streets at dawn looking for an angry fix,
angelheaded hipsters burning for the ancient heavenly connection to the starry dynamo in the machinery of night,
who poverty and tatters and hollow-eyed and high sat up smoking in the supernatural darkness of cold-water flats floating across the tops of cities contemplating jazz,
who bared their brains to Heaven under the El and saw Mohammedan angels staggering on tenement roofs illuminated,
who passed through universities with radiant cool eyes hallucinating Arkansas and Blake-light tragedy among the scholars of war,
who were expelled from the academies for crazy & publishing obscene odes on the windows of the skull,
who cowered in unshaven rooms in underwear, burning their money in wastebaskets and listening to the Terror through the wall…

Ginsberg was an original. He was both representative of his generation and transcended it. He was always controversial. His poem Howl is also an American original, and it changed poetry, literary culture, and the broader culture as well.

But the soul of Ginsberg was a Beat.

On Tuesdays in the month of September, we’re featuring a series on the Beat poets. On Sept. 2, we had an introduction. On Sept. 9, we featured Jack Kerouac. On Sept. 23, we’ll have Denise Levertov, followed by Frank O’Hara on Sept. 30.

The article on Howl at Wikipedia has an extensive discussion of the obscenity trial and the work itself, including a chart of every literary allusion in the poem (and it’s quite a list). And while I’m not a serious fan of Wikipedia, the article on Ginsberg is lengthy, detailed, and actually quite good.

The Poetry Foundation’s article on Ginsberg.

Collections of poetry by Ginsberg include Collected Poems 1947-1997, The Fall of America, Kaddish and Other Poems (“Kaddish” is an even longer poem than “Howl”), Reality Sandwiches, and Mind Breaths.

In 2010, Howl was published as a graphic novel. (No, I haven’t read it; I can’t even imagine it.) Bill Morgan has edited several essays about the obscenity trial and published them as Howl on Trial: The Battle for Free Expression (2006). Ginsberg also wrote a related poem, “Footnote to Howl, ” in late 1955 that continues the same themes.

Ginsberg also published photography, such as Photographs (1991). A collection of his photographs specific to the Beat Generation was published in 2013 as Beat Memories: The Photographs of Allen Ginsberg.

Featured Photo by Berenice Decados, Creative Commons, via Flickr. Post by Glynn Young, author of the novels Dancing Priest and A Light Shining, and Poetry at Work.