Roughly across the street from City Lights Books in San Francisco’s North Beach neighborhood, and tucked in behind a small bookstore of its own,  sits the Beat Museum. I know this not because I saw City Lights on my first visit to the museum,  nor on my second (I ran out of battery in my camera on the first, necessitating a repeat visit). I saw it on my third (or fourth, maybe fifth) trip past, when the museum had become a sort of landmark. My son wanted to see nearby Chinatown, and once done, we inadvertently returned to the same place an undisclosed number of times in our circuitous 10-or-so-mile walk. “Wait, ” I’d say. “I know where we are now. There’s the Beat Museum.” On one of these passes, I spotted City Lights, and of course it made perfect sense that the Beat Museum would be found across the street from the bookstore and publishing house famous for (among other things) selling Beat poet Allen Ginsberg’s banned Howl, which landed owner and publisher Lawrence Ferlinghetti in jail and on trial for obscenity. Allen Ginsberg’s “Howl” on display at the Beat Museum

The Beat Museum—dedicated to spreading “the spirit of The Beat Generation” (which the museum defines as “tolerance, compassion, and having the courage to live your individual truth”)—boasts an impressive collection of photographs and memorabilia from the artists, poets, and writers who comprised the “Beats, ” including Jack Kerouac, Ginsberg, Ferlinghetti, Neal Cassady, and more.

Diana DiPrima and Michael McClure (above) Lenore Kandel (below)

Cosmograph by Harold Norse, created by splattering pigment and rinsing in a bidet

It all began with Neal Cassady

Door from the old Audiffred Building

In one section of the museum there is a display featuring women who were prominent in the movement (such as Anne Waldman, Diana DiPrima, Jan Kerouac), along with a quote from Gregory Corso in response to the question, “Why were there so few women?” Corso explained, “There were women, they were there, I knew them, their families put them in institutions, they were given electric shock. In the ’50s if you were male you could be a rebel, but if you were female, your families had you locked up.” 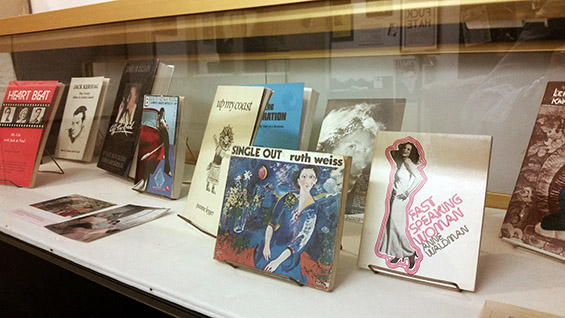 I talked with a friend yesterday about the importance of movements such as the Beats. How, even if one doesn’t have the constitution to bear reading Howl for its graphic images, the unrestrained language of its anger, the work of Ginsberg and others (radical as it was) paved the way for a more gentle openness, a more subtle evolution of thought. Indeed,  while one may not find himself identifying directly with their work, one can appreciate that they did much of the heavy lifting in that tolerance, compassion, and courage to live one’s truth, which (though much work remains to be done) we now enjoy.

The Beat Museum is located at 540 Broadway, North Beach, San Francisco and is open daily

Dip into poetry every weekday morning with a subscription to Every Day Poems and find some beauty in your inbox.