He is born in 1922 to French Canadian parents in Massachusetts. For the next seven years, he speaks only French. His Roman Catholic faith shapes him; it does so for the rest of his life.

As a child, he writes: a newspaper, a diary, radio plays, even a novel.

World War II begins. He becomes deeply concerned by the shift in morals happening around him. He leaves college, joins the Merchant Marine. He writes a novel called The Sea is My Brother that won’t be published for 70 years, long after his death.

He returns to Columbia; he leaves again, this time for the Navy. He lands in a psychiatric unit; he is discharged. He returns to New York, but not to Columbia. He begins to meet with other writers. He already knows Allen Ginsberg. William Burroughs introduces him to philosophers and drugs. What becomes the Beat Generation – he names it – is forming and coalescing.

His father dies. He turns to a new writing project. It becomes The Town and the City, a fictionalized autobiography. He meets Neil Cassady. Their intense friendship becomes the heart of the most famous road trip account in modern American literature: On the Road. It takes six years before it’s published. He calls his writing style “spontaneous prose.” It is also confessional.

His poetry is spontaneous, too. And confessional. He says it is “a kind of new-old Zen Lunacy poetry, writing whatever comes into your head as it comes, poetry returned to its origin, in the bardic child, Truly ORAL…instead of gray faced Academic quibbling. Poetry & prose have for long time fallen into the false hands of the false.” His example of gray faced Academic quibbling: T.S. Eliot.

No longer: “These new pure poets confess forth for the sheer joy of confession. They are CHILDREN. They are also childlike graybeard Homers singing in the street. They SING, they SWING…”

And when you showed me Brooklyn Bridge
in the morning,
Ah God,
And the people slipping on ice in the street,
twice,
twice,
two different people
came over, goin to work,
so earnest and tryful,
clutching their pitiful
morning Daily News
slip on the ice & fall
both inside 5 minutes
and I cried I cried
That’s when you taught me tears, Ah
God in the morning,
Ah thee
And me leaning in the lamppost wiping
eyes,
eyes,
nobody’s know I’d cried
or woulda cared anyway
but O I saw my father
and my grandfather’s mother
and the long lines of chairs
and tear-sitters and dead
Ah me, I knew God You
had better plans than that
So whatever plan you have for me
Splitter of majesty
Make it short
brief
Make it snappy
bring me home to the Eternal Mother
today
At your service anyway,
(and until)

The Beats converge on San Francisco as home base. He studies Buddhism. He writes more novels, published as paperbacks. He Americanizes haiku.

He dies in 1969. His widow seals his papers. When she dies, the archive opens.

He becomes a legend. An American legend.

He is Jack Kerouac.

On  Tuesdays in the month of September, we’re featuring  a series on the Beat poets. On Sept. 2, we had an introduction. Today is Jack Kerouac. On Sept. 16, it will be Allen Ginsberg, followed by Denise Levertov on Sept. 23 and Frank O’Hara on Sept. 30.

Naked Angels: The Lives and Literature of the Beat Generation by John Tytell (2006)

Atop an Underwood: Early Stories and Other Writings, by Jack Kerouac (2000)

Kerouac: A Biography, by Ann Charters and Allen Ginsberg (1994)

Photo by Berenice Decados, Creative Commons via Flickr. Post by Glynn Young, author of the novels Dancing Priest and A Light Shining, and Poetry at Work. 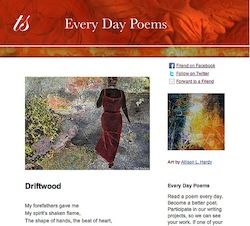