Poets and Poems looks at the life of R.S. Thomas (1913-2000), an Anglican curate and rector, a Welsh nationalist, and, as it turned out, an extraordinarily fine poet.

Born in Cardiff, Thomas spent most of his life and career in Wales. In 1940, he married Mildred (Elsi) Eldridge, and they were married more than half a century until her death in 1991. 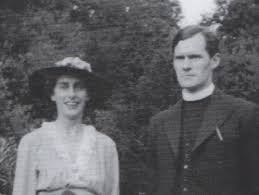 If one had considered the couple in 1940, one would have expected Elsi to be the one who would achieve fame and notice. An artist trained at the Royal Academy of Art, she was already recognized for her work. He would not publish his first book of poems until 1946, six years later. Their relationship has prompted much speculation as to how close they really were and whether Thomas’s troubled relationship with his mother affected his marriage.

And then we have the poems—the poems he wrote to and for Elsi. They provide deep insight into not only the Thomas marriage but, like poems can do, into all marriages.

These poems have not been previously published as a collection. Poet, critic and historian Damian Walford Davies has brought the poems together and arranged them in Poems to Elsi. (Rowan Williams, former Archbishop of Canterbury, provides the foreword.) What we read is fifty years of a marriage, with all its tension, intimacy, love and tenderness. The poems extend from first meeting and the beginning of their relationship all the way to Elsi’s death and beyond, when she becomes memory.

I found the poems moving and full of almost awe and wonder, but also distanced, as if Thomas never could quite get directly to Elsi’s heart. And this wasn’t so much because he didn’t try but because she seemed to stop him. Consider the poem “Touching”:

Accidentally, so the response,

To her cost. The lips’ prose

But necessary; their flair

For some small fun with

It is the man burns. The attraction prompted by what for her is a simple, almost absentminded, touch but for him a jolt of electric current (“It is the man burns”), is a kind of theme in many of these poems. And yet they also express a profound and abiding love. He may not completely touch her heart, but what he is able to reach is sufficient.

When the poems reach Elsi’s death, when they both are in their late 70s, Elsi becomes memory, yes, but all the more real for that. These are some of the most heart-wrenching poems in the collection; his pain is almost visible as he remembers her smile and the life they lived together.

Poems to Elsi is a memorial to both R.S. Thomas and Elsi. Davies has honored them and remembered them in a way only a poem can do.

Image by Vinoth Chandar. Sourced via Flickr. Post by Glynn Young, author of the novels Dancing Priest and A Light Shining, and the forthcoming Poetry at Work (T. S. Poetry Press).