Ben Myers has been a friend of mine for several years, and I’m a big fan of his work. That’s why I was delighted when he sent me a sestina that quickly became one of my favorite poems in How to Write a Form Poem. I’m partial to sestinas; you’ll learn that soon enough. But Myers brings the form to a whole new level by telling a story that flows so naturally from the telutons (the six repeating end words) that you forget about the technical agility that went into crafting the poem.

Here are the first two stanzas from “The Muse” to start you off. You’ll have to read the rest when you get your hands on a copy of How to Write a Form Poem.

The Muse (an excerpt)

Calliope, when she packed up and came
to Oklahoma, first went out and found
a calico white cotton dress, two out-
side baggy pockets on the front for stuffing tangled
wild onion stocks she gathered from the hills.
She hummed a bit and tried to look less holy.

On Sunday she would belt the hymns with holy-
rollers. They told her they were glad she came.
That’s where she met Hank Smith, who lived among the hills
of rusted junk outside of town. They found
a lot to talk about. He liked to comb her tangled
blonde hair and pick the burs and grass bits out …

Here’s what the poet himself has to say about “The Muse”:

Tania Runyan (TR): Tell me a little about the origin story of this poem.

Benjamin Myers (BM): The poem began when I started wondering about the narrative possibilities of the sestina form. I wanted to see if a kind of poem built on so much repetition could be used to tell a story, somehow using the repeated words to move the story forward rather than circling back around. I was basically just interested in that tension between pattern and progression.

TR: Why did you choose to write the poem as a sestina? Or did the form “cause” the poem?

BM: It really was a case of choosing the form first and then the poem following. This is only the second sestina I’ve published, and I was drawn to the challenges of the form and to the novelty of making it do something it usually doesn’t.

BM: I hope they learn that form is alive and well, that sonnets, villanelles, and sestinas are not just for puffy-shirted dead poets who wrote with quills. I hope they learn to hear the contemporary possibilities in formal poems. 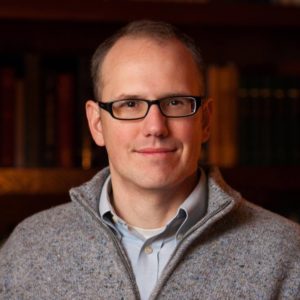 Benjamin Myers was the 2015-2016 Poet Laureate of the State of Oklahoma and is the author of three books of poetry: Black Sunday (Lamar University Press, 2018), Lapse Americana (New York Quarterly Books, 2013) and Elegy for Trains (Village Books Press, 2010). His poems may be read in The Yale Review, Rattle, 32 Poems, Image, Nimrod and other literary journals as well as in magazines such as Oklahoma Today and The Christian Century.

He has been honored with an Oklahoma Book Award from the Oklahoma Center for the Book and with a Tennessee Williams Scholarship from the Sewanee Writers’ Conference. His prose appears in World Literature Today, Books and Culture, First Things and other magazines. Myers teaches poetry writing and literature at Oklahoma Baptist University, where he is the Crouch-Mathis Professor of Literature. His first book of nonfiction, A Poetics of Orthodoxy, was published in 2020 by Cascade Books.