I had the pleasure of meeting poet David K. Wheeler in Chicago during the 2012 AWP Conference, where I also got my hands on his collection Contingency Plans. The book is a beautiful, soulful read that features quite a few forms—sonnet, sestina, and villanelle. It also features the pantoum “Lullaby for Sunshine Silver Mine,” a stunning poem that I am excited to include in How to Write a Form Poem.

Here are the first couple of stanzas from Wheeler’s pantoum. You can read the rest in Contingency Plans, and, of course, How to Write a Form Poem.

Lullaby for Sunshine Silver Mine (excerpt)

Close your heavy eyes a while,
just hear the caged canary sing
as the mountain pyre ambles by.
Fix your muffled ears on listening.

Just hear the caged canary sing
for all the widows weeping at home.
Fix your muffled ears on listening
for your breath sweeping against the stone… 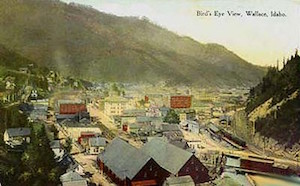 Here’s what the poet has to say about his moving tribute to the miners who lost their lives.

Tania Runyan (TR): Tell me a little about the origin story of “Lullaby for Sunshine Silver Mine”:

David K. Wheeler (DKW): I grew up in northern Idaho, which is more mining country than potato country. In elementary school, we’d take field trips several towns over to tour the retired Sierra Silver Mine in historic Wallace, Idaho. The guides would walk us down one passage, take a couple turns, and then lead us out another.

It was around that time when I first heard about the Sunshine Silver Mine disaster in the same area. A fire broke out in May of 1972, and 91 miners died by carbon monoxide poisoning. That story surfaces in my mind every time I’ve been to Wallace since, compounding my sense of claustrophobia whenever I’ve toured the Sierra Silver Mine (which I’ve done more often than seems necessary), especially once the group makes that turn where entrance and exit fall from view.

TR: Why did you decide to write the poem as a pantoum? Or did the form “cause” the poem to happen?

DKW: To be honest, this poem came as the result of an assignment in a forms poetry class I once took. But yes, since I was handed the form first, the poem came as a natural progression. The repetitious, melodic nature of the pantoum felt like it was best suited for a kind of lullaby—those soft, circuitous songs intended for children’s bedtimes that sound oddly foreboding when one stops to pay attention: babies in treetops crashing through broken boughs back to earth, and all that. Carbon monoxide poisoning seemed all too fitting.

DKW: I hope poets will learn that forms aren’t archaic constraints to try to squeeze modern ideas into; they’re vehicles that can enhance the mood or story a poem is conjuring if paired well. A highly repetitive form like the pantoum isn’t going to work well for linear storytelling, but it can absolutely capture the essence of listless drifting or, as in my case, morbid fixation. David K. Wheeler is the author of Contingency Plans: Poems, published by T.S. Poetry Press. He has written for The Seattle Times, Catapult, The Stranger, The Morning News, and others. He earned his BA in Creative Writing from Western Washington University and is now associate editor for Shelf Awareness in Seattle.