Flies can teach you a lot about poetry. Ask Robert Hudson.

Hudson has been a teacher, a clerk, an editor, a translator, a book designer, a proofreader, a publisher, a writer, a bookbinder, and a printer (with a certificate in printing by hand). With a master’s degree in comparative literature, he worked for 34 years as an editor for a major publisher. He loves poetry; he’s a member of the international Dante Alighieri Society and the Thomas Traherne Association. And he’s a member of the West Michigan Thomas Merton Society.

He also knows a lot about flies. And in The Poet and the Fly, he considers how the fly has served as an object for numerous poets over the centuries. 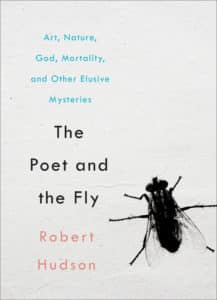 Yes, the fly. The common housefly. The pest who loves to discover our food when we eat outside. The one who, once inside, seems almost impossible to corral and eliminate. That fly. “We forget, in our air-conditioned dens and climate-controlled offices,” Hudson writes, “how much of human history is bound up with Musca domestica—the common housefly. Flies are everywhere. They are one of the great neglected invariables.”

And poets have been writing about them, meditating upon them, using them as metaphors, following their trajectories, and symbolizing them for a very long time.

Hudson looks at seven poets who have written about flies, each in a different way. As you read this work, and occasionally marvel at what’s been written, you gradually realize that Hudson is not only talking about flies. He himself is using the subject of the fly to explain how and why poets write poetry.

English poet Thomas Traherne (1636-1674) was largely unknown as a poet until his life and works were plumbed in the 20th century. One of his meditations addresses the fly, and he uses the insect to examine human existence. William Oldys (1696-1761) was an antiquarian and bibliographer, known for serving as the first editor of Biographia Britannia and for his bibliographical work for the Duke of Norfolk. He rubbed shoulders with Alexander Pope and Jonathan Swift. He saw the fly as a symbol of mortality. “The Fly” by William Blake

French poet Guillame Apollinaire (1880-1918) pondered the fly as a thing in an of itself, “hoping to find a hint of what its reality might be, to sense its mysterious essence, its thingness,” says Hudson. And Irish poet Robert Farren used the fly to tell a story.

Hudson has a fascinating essay on each of these poets, the works in which they used the fly, and how their thoughts about the fly helped shape some of the vital questions they wrestled with. And as he points out in an appendix, others have used the fly in their works, including William Shakespeare, Robert Herrick, Matsuo Basho, Thomas Gray, Goethe, Walt Whitman, Walter de la Mare, and Vachel Lindsay, among others. To give an idea of how well-researched this book is, the bibliography runs about 20 pages. Hudson is the author of The Monk’s Record Player: Thomas Merton, Bob Dylan, and the Perilous Summer of 1966 (2018), Kiss the Earth When You Pray: The Father Zosima Poems (2016), The Art of the Almost Said: A Christian Writer’s Guide to Writing Poetry (2018), and Beyond Belief: What the Martyrs Said to God (2002). He also serves on the board of the Calvin College Center for Faith and Writing.

The next time a fly is buzzing about your head, or is desperately trying to make its way through a window pane to freedom, consider what many great poets have thought about the little pest. And consider what the fly has to say to us about why we write poetry. Well done, Robert Hudson; The Poet and the Fly is a rather profound work.