In her lifetime, poet Sara Teasdale (1884-1933) was popular with the public and critics alike. Her third poetry collection, Rivers to the Sea (1915), was a bestseller; her fourth, Love Songs (1917), won what eventually was named the Pulitzer Prize for Poetry. Her final collection, Strange Victory (1933), was published after her death and was well received by critics.

Her poetry gradually fell out of critical favor. I read her poems in English literature textbooks in high school and college, but her work was fast disappearing from those sources by the 1980s. (Critics and scholars must get suspicious if something is popular with the public.) Recently, her work has begun to make something of a comeback, and rightfully so.

Tweetspeak Poetry was born on Twitter in 2009; you’ll be hearing more about our 10th anniversary next month. It started as a poetry party, with prompts from Susan Goldsmith Wooldridge’s poemcrazy, then, later, a number of poetry, fiction, and non-fiction texts. Quite a few have been held over the years, but none of the parties were actually “live and in person.” 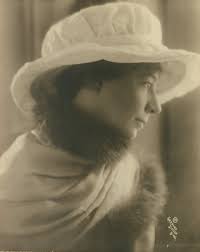 Until this past August. A Tweetspeak Poetry retreat at The Center at Mariandale in Ossining, New York, included a live poetry party, similar to what happens on Twitter but with participants gathered in a room (and without Twitter). Two sources provided the improv lines. First, throughout the retreat, people put lines they’d written in response to the retreat memory poem (Barter by Sara Teasdale) in a poetry basket left on the workshop table.

Second, the live improv involved a Google doc into which three “Twitter executives” typed—one prompter, and two “tweet collectors.” The Google doc was projected onto a large screen, so all participants, seated in a half circle, could see the screen. Similar to a Twitter party, the poets in attendance would write to the prompts but also to each other’s lines as they saw them appear on the screen. When a poet had finished a line, they had to call out, “Send tweet!” and one of the two tweet collectors would then run to get the line from them, then type it into the Google doc.

It was sweet chaos, just as a Twitter party is. But it had the added benefit of being funnier and making the tweet collectors get a little out of breath (which, noted one, the poets seemed to relish, as they held their “tweets” high and waved them around). The Twitter executives engaged in a bit of amusing “pushing each other around, their Google doc entries sometimes colliding and displacing each other’s position in the document. One participant noted that it felt like Lucy and Ethel’s chocolate candy assembly-line episode.

No one stuffed chocolates in their mouth, but here are the first five poems that were created. Next week, we’ll have the last five poems.

Flowers blue as cobalt,
blue flowers, bloomed in flame,
flicker in the garden, igniting
the breeze. The blue flame holds a question,
taking me into its heart, then its root.
The blue butterfly has the answer.
What else can you question in blue?

Cobalt tile, cool under my bare feet,
answer the flames, ignite them with rain,
ignite, boil, sink the flames in cobalt.
What’s the question? I am an answer.

Where will you find me, myself
in blue dreams?
There are no real questions.
There are only answers to your dreams.

Find me where the loon settles to sing,
drawing secrets from the fire,
its orange flame a dream,
flickering in the woods.

Making angels in the coal dust

The letter in the coal dust
can be rearranged to spell your secret,
to spell me. crushing what’s left of my soul.
I became the labyrinth;
I became the letters in the dust.

Teasdale said it first:
“The moon was coming over
the blue Connecticut hills.”
And I caught a glimmer of it in Illinois.
It was a suburban Sasquatch serenade,
Sasquatch singing like jackhammers
in a cobalt sky, whirling and singing
“Kiss me under the purple moon,
“Kiss me in Connecticut,
“Please don’t recycle my kisses.”
In Connecticut, the kisses recycle
in single stream.
It’s okay if you want to reuse them,
but please do not reduce them.

The moon is a forward thing

Walking into a bar, the moon
kissed an opera singer
stepping on a rusted nail,
awakening its rusted heart.
“You are the semicolon
in a storm of commas,”
the opera singer said.
“You are welcome,” said the moon,
drawing a star from its fallen heart.
“But I think I lost you and my phone.”