Tweetspeak Poetry was born on Twitter. Even before a website existed, poetry parties were being hosted, participated in, and then edited into a kind of official record of the events. The prompts to spark the writing came from a wide variety of sources—poetry collections, Greek myths, nonfiction works, memoirs, and other works. About the only thing each party had in common was the length: always kept to one hour.

On Tuesday, January 15, Tweetspeak hosted another poetry party on Twitter. This time, the prompts were taken from Braiding Sweetgrass: Indigenous Wisdom, Scientific Knowledge and the Teaching of Plants by botanist and Native American Robin Wall Kimmerer. The book braids together the narrative strands of Kimmerer’s scientific training, experiences and shaping of her Native American culture, and the stories told by flowers, fruit, vegetables, grasses, and other plants.

She is the Distinguished Teacher Professor and Director, Center for Native Peoples and the Environment, at The SUNY College of Environmental Science and Forestry in Syracuse, New York. Kimmerer is also the author of Gathering Moss: A Natural and Cultural History of Mosses. (I’m old enough to remember my grandparents talking of the days when Spanish moss—which, as Kimmerer notes, is not actually a moss—was used to stuff mattresses.)

Eight poets participated in last Tuesday’s party. A ninth stopped by for a few moments, offered a line, and then vanished into the Twitter-sphere. Lines from the event’s tweets have been assembled into ten poems, five of which are published below. The remaining five (and a description of the editing process) will be published next week. 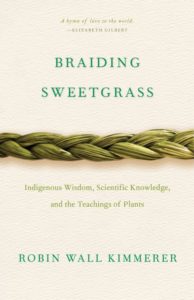 Skywoman joins the council,
or counsel, of pecans,
becomes the keeper
of pecans, becomes
another offering of light.
Keepers of the pecans
while away their time
cracking shells,
learning their grammar,
the grammar of pecans,
cracking pecans,
sitting amidst asters
and goldenrod, echoes
of beauty,
golden aster,
golden rod,
golden berry
twister into braids,
gathered to make
summer’s best bouquet

How sweet is the offering
of asters and goldenrod
and berries falling
like circles, turning
Skywoman’s cheeks
to blush. Planting sweetgrass
like circles of aster berries,
Skywoman tries the hands
that braid the maple sugar moon.
The moon sweetens the night,
stirring hearts, singing sugar songs,
finding willing students, willing hands,
willing the hands, willing the keepers
she saves for another day,
even another hour, the song
that moves a husband’s heart,
the work of maple sugar,
the work of asters, braiding
the song like moons, then
unbraiding, the moon falling,
barely audible as the muted taps
of pecans landing in sweetgrass.

Skywoman takes a moment
to recall the consolation of water lilies.
She seeks the consolation
of water lilies, lilies in circles,
lilies in sweetness.
Bathed in the maple sugar moon,
the water lilies sing,
voices of sweetness, water rising,
sing the moon like a twinned braid,
Mute underwater, the lilies become
Skywoman’s voice, rising and
falling like circles and circles
and circles, voices in harmony
as heard no more, bathing
the afternoon in sugar twists,
sweet consolations of a sugar moon,
gentling the words on divine lips,
tending the sugar,
tending the keepers,
tending the sweetgrass.
Does gratitude have a grammar?

Skywoman learns the grammar of beans

It came to Skywoman while picking beans
in the afternoon,
listening to voices of sweetness,
water rising, rising not,
like the moon:
the secret of happiness.
Plucking the secret from the bush,
she heard the sounds of being,
but not the voice of Skywoman,
unfulfilled.
Why ask what only beans can know?
What, she asked, is the grammar of beans?
What, she asked, is the syntax of beans?
The beans bid her take refuge
in water, refuge in circles,
and twist the afternoon
into the secret. Once she knows,
once she swells in allegiance
to gratitude, she asks
where is my consolation now?

Photo by Pedro Fernandes, Creative Commons, via Flickr. Post by Glynn Young, author of Poetry at Work and the novels Dancing Priest, A Light Shining, Dancing King, and the newly published Dancing Prophet.