I found poet and writer James Matthew Wilson in a short reference on a blog—short but glowing, as in, “You need to read Wilson’s new poetry collection, The Hanging God.” I went looking, found more references, and landed at Amazon. Click.

Wilson is an associate professor of Literature and Religion in the Department of Humanities and Augustinian Traditions at Villanova University. He’s both a poet and a poetry critic. He writes for several publications, many but not all on the conservative side of the political spectrum, which is unusual because that’s not where you find most poets today. He’s published in The New Criterion, Front Porch Republic, Hudson Review, Raintown Review, The Weekly Standard, Dappled Things, and other literary and political journals.

He’s published eight books, including a poetry collection, Some Permanent Things; The Catholic Imagination in Modern American Poetry (2014); The Fortunes of Poetry in an Age of Unmaking (2015); and The Vision of the Soul: Truth, Goodness, and Beauty in the Western Tradition (2017).

The Hanging God, published in 2018, is his second collection of poetry. The foreword to the collection is written by poet Dana Gioia, a fellow Catholic and a fellow poet of new formalism. Gioia points out Wilson’s formalist style but notes it’s new formalism with a difference; it harks back to more classical poetry of the 16th-18th centuries. Reading Wilson’s poems in The Hanging God is like reading the Elizabethans or Milton writing in contemporary English.

What one finds in these poems is strong allusions to both biblical and classical Western themes, written in rhyme, meter, and formal stanzas. Consider this poem:

Agricola: A Song for Planting 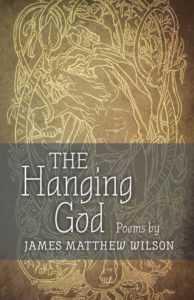 My arms have labored such small cares
And failed them. So little as one seed,
I’ve sown or tossed among the tares,
Shriveled with thirst and failed to feed.

I’ve looked with hope on stony ground.
I’ve scythed the grain at autumn’s blush.
But now. the earth is cold; the browned
And fallen husks of last year crush

Beneath my booted step. This year
Threatens to end new growth in drought;
These dead stalks tokens of that fear
For what our efforts bring about.

What pretty lie did I speak when
I cast my efforts to sustain
Each growth? Each year forgives my sin,
But remains of each loss remain.

“Agricola” is Latin for farmer, so you know this is likely a poem about agriculture. The title suggests the earliest published work by the Roman historian Tacitus. He wrote an account of his father-in-law, Gnaeus Julius Agricola, who helped conquer part of Britain for Rome. The account gives a rather dark view of Rome, and its corruption and political disarray, compared to the defeated Britons.

The poem also includes the reference to tares, or weeds, echoing the parable of the tares as recorded in the Gospel of Matthew in the Bible. It’s a story about the faithful and the unfaithful existing side by side until the day of harvest, or judgment. Or the reader can ignore the Roman and biblical allusions and consider the poem at face value. It becomes a song about planting that sounds more like a dirge about the limits we each experience.

It’s a lot to unpack. The poems of the collection are organized in six sections; the third and the fifth sections are series of related poems. One series concerns a failed relationship; the other describes the Stations of the Cross. The two are not unconnected, as if the reader is being shown poetry of the profane and of the sacred.

To read The Hanging God is to engage in an exercise of stillness and reflection. The poems demand thoughtful consideration and provoke an irresistible urge, almost a compulsion, to reread them to find new layers of meaning. I’ve been impressed by many poetry collections, but only a tiny handful have left me feeling undone. The Hanging God is one of them.

Photo by Larry Smith2010, Creative Commons, via Flickr. Post by Glynn Young, author of Poetry at Work and the novels Dancing Priest, A Light Shining, Dancing King, and the newly published Dancing Prophet.