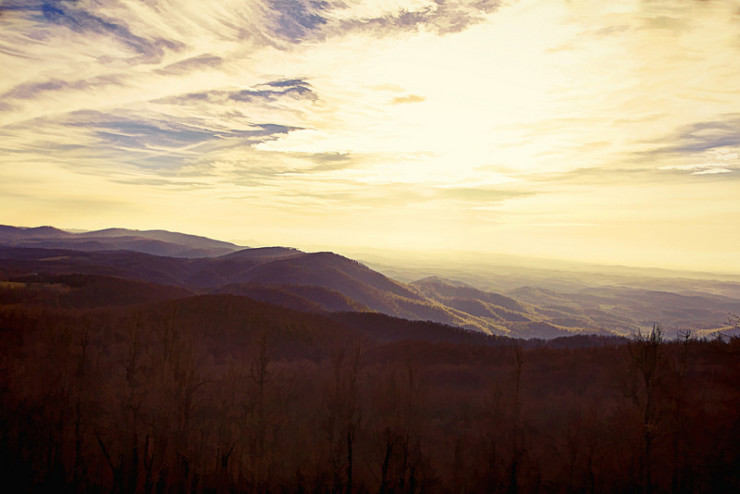 Imagine a man whose country is taken over—and he’s forced to change his name so that it sounds like one belonging to the new political power. Imagine that same man emigrating to America, and once again having his name changed to sound less “foreign” and more pronounceable, at least for the immigration official. Imagine that man accepting the last change in his name and getting on with his life in his new country.

This is part of the story Karen Paul Holmes tells in her new poetry collection, No Such Thing as Distance. And the man with the three names is her father.

This sense of change of family pervades the 46 poems of the collection. She writes of other things, but it is her family poems—about relatives, her father, herself, her children—that provide the structure of the poems. If there’s any doubt about where Holmes’s head and heart are, simply consider the four Macedonian family recipes she includes at the end—for zelnik (an onion and filo pastry dish), a family interpretation of the Coney Island hot dog, Macedonian bean soup, and finikia, also known as Aunt Vera’s Cinnamon Cookies.

When it comes to family, there is indeed no such thing as distance. For a brother’s illness and surgery, Holmes flies from Georgia to New York and lives in his home, almost living his life because he is family, as he recovers. When a brother has cancer surgery
you feel the scalpel too.
No blood, just hot pain
body and spirit.
And yet you don’t.
Can only imagine your own
meager misfortunes
multiplied, multiplied.

Fly north to be with him.
While he sleeps at Sloan Kettering
you lie on his Jane Street bed
but can’t crawl into his fear.
Boil his kettle, sip his Jasmine tea
splash your face at his sink
see a likeness in his mirror.
You take the subway uptown
a bus across Central Park
walk a bit down York
to sit by his side. Holmes is the author of Untying the Knot (2014), a collection of poems focusing on the breakup of her marriage. Her poems have been published in a number of literary journals, including Prairie Schooner, Crab Orchard Review, Poetry East, Atlanta Review, the Southern Poetry Anthology, and Poet Lore. She was formerly vice president of Communications at a global financial services company and is now a freelance business writer and writing teacher; her web site is Karen Paul Holmes.

Holmes writes of weddings, her own and others; living in the American South; making zelnik for a family reunion (and thus the recipe); her mother’s funeral; her miscarriages; her childhood; and more. She writes what of she knows in No Such Thing as Distance, but more than that, she writes of what she loves.

Photo by Donnie Nunley, Creative Commons, via Flickr. Post by Glynn Young, author of the novels Dancing Priest, A Light Shining, and the newly published Dancing King, and Poetry at Work.