Think Halloween, and what comes to mind (after trick-or-treat candy) are the big three icons of witches, pumpkins, and black cats. Mummies, skeletons, and zombies are more Johnny-come-latelys in the Halloween extravaganza. These days, witches have gone mainstream respectable, and Linus and Charlie Brown own the Great Pumpkin, so the black cat is left to shoulder Halloween largely alone.

My family had a black cat. Actually, the cat had us. One day in the middle of winter the cat showed up in the neighborhood. It had a collar but no tags, and it looked healthy. The neighborhood children fed her potato chips and milk, guaranteeing she would hang around. My wife warned the children that, if they kept feeding it, the cat would never leave (not the best argument to make to a child).

And then, in early March, an unexpected cold snap pushed the temperature below zero. My wife, taking pity on the cat, let her stay in our garage. That’s all it took. In deep gratitude, the cat left my wife a thank-you present on the back step—a baby bunny with its head removed.

We were adopted, the deal sealed with a ritual sacrifice. 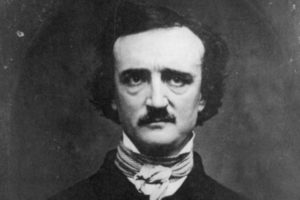 The cat moved in. I’d never been a cat person, but I took the cat, whom our youngest gave the original name of “Kiddy,” to the local animal clinic for its shots. We learned there that the cat was a male. The name stayed the same.

Kiddy turned out to have the personality of a very friendly dog. He got along fine with our spaniel. He made himself at home on our laps while we watched television. He’d follow us on walks. All he asked was to be fed and allowed inside in the event of rain—he was terrified of thunderstorms.

Not all black cats have fared as well as Kiddy.

One of the creepiest stories written by Edgar Allan Poe (1809-1849) is “The Black Cat,” first published in 1843. The narrator, who starts life off as a rather charming man, gradually becomes a brute through alcoholism. He fearfully mistreats his black cat, and eventually hangs it from a tree outside the house. His terrible action results in a fit of remorse, and he resolves to find a cat to treat better. He does, but you know the evils of strong drink—back the man slides, and commits an even more fearsome act. In the end, the black cat has his revenge.

Rainer Maria Rilke (1875-1926) played to the common reaction to (and fear of) black cats with a poem, one so vivid that it could be a description of Poe’s black cat.

A ghost, though invisible, still is like a place
your sight can knock on, echoing; but here
within this thick black pelt, your strongest gaze
will be absorbed and utterly disappear:

just as a raving madman, when nothing else
can ease him, charges into his dark night
howling, pounds on the padded wall, and feels
the rage being taken in and pacified.

She seems to hide all looks that have ever fallen
into her, so that, like an audience,
she can look them over, menacing and sullen,
and curl to sleep with them. But all at once

as if awakened, she turns her face to yours;
and with a shock, you see yourself, tiny,
inside the golden amber of her eyeballs
suspended, like a prehistoric fly.

Our Kiddy never appeared menacing. He did like to surprise us, though. One of his favorite surprises was to leap upon a chest of drawers just inside the door of my son’s room and wait for one of us to walk into the room before he leaped. He also liked to sit calmly on the counter in the hall bathroom, waiting for someone to walk in and turn on the light to find THIS HUMONGOUS BLACK CAT just sitting there. Yes, it could be unnerving. The cat enjoyed it all. He also enjoyed chasing bunnies—he kept the rabbit population under control in the yard, and we often spotted him dining alfresco. Kiddy was with us about five years. However long he had roamed free before joining our family, he had gotten himself into a few scrapes with other cats, and he was eventually diagnosed with feline AIDS. We made the decision to put him to sleep, and my son and I were there. I still wasn’t a cat person, but then, Kiddy was more of a dog than a cat. My son and I both shed tears.

This Halloween, you might think of a black cat as Poe did—an instrument of rather blood-curdling revenge. You might consider Rilke’s cat, carrying your image in those amber eyes. You may just think about the traditional black cat, associated with bad luck.

Or you can think about Kiddy, the cat who should have been a dog, full of fun and surprises, leaping from the tops of dressers and leaving tokens of his gratitude at the back door.

Photo by Sebastien Barre, Creative Commons, via Flickr. Post by Glynn Young, author of the novels Dancing Priest and A Light Shining, and Poetry at Work.