We’ve offered to publish your How to Write a Poem stories. Today’s story is from teacher Joel Jacobson. As part of the feature, we’ve published three student poems, too!

How to Write a Poem in the Classroom

“I’m not very good at poetry.”

This was the common response when I asked my high school students to register for Advanced Creative Writing: Poetry at D’Evelyn Junior/Senior High School. I was in the process of creating curriculum from the ground up, since the class had never been offered. I had my essential learnings, course outline, and a few core texts to guide us.

After registration, the roster count was only fourteen, and I needed 20 students in order for the class to get scheduled. I spent two full semesters talking-up the class to my Intro to Creative Writing students. I begged those who had a hint of poetic voice to sign up. I prodded those who were naturally strong writers. I bribed some with the possibility of playing Boggle on Fridays. And somehow, the registration numbers settled at twenty-one. It was go time.

I reviewed student work from Introduction to Creative Writing. Many poems lacked a strong image. Where was the mystery? Where was the aha!? Where was the buzz? (If you’ve read Tania Runyan’s How To Read A Poem, you know what I mean.) 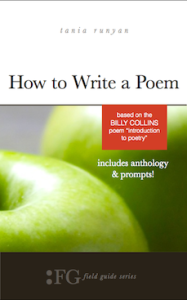 My original plan to begin the semester discussing syntax was not going to work. We needed a common language, a common understanding of basic poetic constructions and patterns before we could move into the advanced part of the class. I needed a resource that provided usable terminology and explanations for how to incorporate poetic techniques. I needed strong examples, both accessible and complex. I needed honesty, approachability, and challenge. I needed Runyan’s newest title, How To Write a Poem.

We spent the first two weeks of the semester working through each chapter, responding to the prompts. While I had introduced all of my students to imagery, line endings and lengths, and sound, Runyan provided brilliant explanations that opened the floodgates to their understanding.

3 poetic keys, for us, turned out to be:

• Differentiation of adjectives from images. The idea sounds simple enough, but every student in the class was able to look at his or her free writing and identify “imagery” that was predicated on adjectives rather sensory perception.

• The perfect poem example—Dulce Et Decorum Est—explained the elusive aha! (surprise, twists, turns, etc.). The contrast between the image of suffering through war and the phrase “It is sweet and honorable to die for your country” provides several opportunities for the unexpected. Our class discussed their moments of surprise in the poem, which lasted much longer than I anticipated, especially when we started to dig into why we were surprised.

• Runyan’s revision of “The Worship of Nature, ” by John Greenleaf Whittier, granted us permission to let a poem speak for itself. We were freed from the charge of having to put a neat little bow at the end. We could present an image and a tone and trust those to be the ground on which a reader could stand. We were invited to take our readers to the end of our poems in a way that would make them want to dive back in rather than walk away unmoved, unchanged.

I was amazed to see how student work began to blossom immediately. It wasn’t all Dickinson and Whitman, but images started to hold meaning. Fewer mixed metaphors appeared. Musicality surfaced, though very few students chose to rhyme.

Students workshopped their poems with the whole class. They encouraged each other, drew inspiration from each other, and challenged each other. We wrote about childhood, love, death, forging identity, dreams, and more. We recorded our journeys without resorting to cliché. We came to a better understanding of each other and ourselves. And we even wrote some amazing poems. Through all of it—writing, workshops, and discussions—poetry happened.

Truth be told, before teaching the class, I’d been suffering poetry burnout for a couple of years. I got caught up in trying to get published and please editors, and I felt like I couldn’t climb out of the rut of writing the same poem again and again. Imagine my uncertainty in creating an experience where students could fall in love with poetry, where they could be genuine and vulnerable, where they could learn to be true poets.

It turns out my burnout didn’t matter. My students begged (demanded?) that I try the prompts. Because I refuse to create assignments I’m not willing to complete, I joined the madness. I even finished my first sestina. (Side note: I’ve never seen angrier students than when I assigned a sestina. Let it be known that anger and difficult forms sometimes lead to really great poems.)

In the end, the class was a success on multiple levels. Most of my students expressed their gratitude for helping them find their poetic voice, for making poetry and writing fun again, and for providing a safe place. What started with uncertainty and doubt ended with memorable experiences, genuine friendships, and some really special poems. I’m grateful for Runyan’s books and Tweetspeak’s resources; they’ve helped me direct kids in a meaningful manner and find ways to surprise them with the restorative joy known as poetry.

A Day is Coming

Don’t tell the Queen but here comes the rain
It’s circling the trees, it’s waking the wind.
And the ashen­-faced tinker toy soldiers don’t have armour
To protect their mistress reclining behind her veil.
All it takes is a moment’s lapse
And food for the wolves will be what’s left.

Continue, Your Majesty, discard your gems and look left.
Tell everyone they’re heretics over whom you must reign
As you pool silk scarves in starved servants’ laps
Laid out only for you to admire and again wind.
Let me bow low and take off my hat as vale
To the Empress and her men of gleaming armour.

Shall I pretend to be a courtier, mon amour?
And plot your demise when to my own devices I’m left?
Face the blade and voyage to Death’s sloping vale.
Here and now is our turn to take the rein
On the beasts of shadow and wind.
All it takes is a guard daydreaming, one lapse.

Your gladiators battle a lion, running laps.
They’re only children dressed in aluminum armour,
And a mother’s cries are joined by the howling wind.
Every body is torn to pieces, save one that’s left
And soon enough he’ll be the one to reign.
He stands robed in blood, congealed splatters form his veil.

All of your gold, your opal roses, it’s all to no avail.
Your thorough education has had a lapse.
Because you’ve never stood outside in the rain
Your title cloaks you against it, is your armour.
And whatever remains beneath shrivels. Nothing is left.
So you imagine we, like you, are clockwork that you must wind

To you, we are gears, with pain as a lever for you to wind.
Nature has never forced you to bid vale
To the crown and jewels you were born, never left
You in the muck to toil, our right to choose ourselves has lapsed
But this dynasty of dismissal can’t last, so we’ll arm our
Better selves, it’s time for a new reign.

Run around your clockwork, wind us up for the final laps.
We’ll bid vale to our last scraps of armour.
This is all we have left, in the drum of the rain.

When I was a wizard,
boiling potions in tire swings,
with bath robes for cloaks
and wands so thrifty
that I plucked them straight
from the ground, littered
also with broomsticks
and sprouting womping willows,
behind the crooked swingset,
perched with pinecone owls,
beyond simple confines
of chain­link fences,
I made magic
levitating, conjuring,
suspending reality.

A Day at the Beach

In indecisive trenches she buries her feet,
Sand and toes melded in the sea’s
Preoccupied embrace. Her white wrists
Punctuate blue veins in the cold water;
Waves settle into her half-­open mouth
And over her tongue, relentlessly, march.

“It’s warmer than it was in March, ”
The man comments, his wife’s feet
Pruning in the salt, her mouth
Twinged in disgust—seas
(With her husband and saltwater)
Tempt her to slit her dripping wrists.

The girl with the white­blue wrists
Is a smudge; lapping waves march
Between her and them, but water
Distorts distances—a feat
That has been perfected by seas,
But not by the woman with the twinged mouth.

“Stop smacking your mouth, ”
The woman tells the man, her wrists
Red and itchy from the sea’s
Relentless swirling of fish and salt.
A family on the squiggly shore marches,
A bold umbrella followed by trusting feet,
While the woman boils in the water.

The girl (now a bigger smudge), and water
Know each other well, for her mouth
Houses it and her feet
Are blanketed by it and her wrists
Bob up and down in it and the waves that march
Lap against her skin—a ceaseless seize.

“Funny how the sea’s
Quieter and the water
Is more blue than in March:”
Words that drip­drop from the man’s mouth
And splash onto the woman’s wrists,
Then dive and scratch her pruning toes.

The seas dissect the dead body with the filled mouth,
Water massaging out the color, graying the wrists,
The man and woman march, blindly, towards the buried feet.