One of the most prestigious (and financially rewarding) prizes in poetry is the Poetry Book Society’s T.S. Eliot Prize. Founded in 1953 by T.S. Eliot and several friends to “propagate the art of poetry, ” the Poetry Book Society is based in the United Kingdom and draws interest from all over the English-speaking world. The prize, created in 1993, provides 20, 000 pounds (about $30, 000) to the winner and 1, 500 pounds (about $2, 250) to each of the other nine shortlisted nominees.

The 2015 shortlist was impressive, including such stellar poets as Mark Doty, Sean O’Brien and Claudia Rankine. All 10 nominees participated in a program of readings in London before the winner was announced.

This year’s winner was Sarah Howe for her first collection of poetry, Loop of Jade. It’s a beautiful collection of 37 poems, filled with precision, imagery, and flat-out beauty. In many of the poems, Howe explores her dual cultural ancestry—she was born in 1983 in Hong Kong, the daughter of an English father and a Chinese mother. The family moved to the UK when she was a child.

Using both prose poems and free-verse, Howe explores her inheritance. The title poem, for example, is her mother talking about growing up in deprivation in a Chinese tenement. She writes: “I can never know this place. Its scoop of rice in a chink-rimmed bowl, its daily thinning soup.” She explains this loss as a fact as opposed to a lament, which has the curious result of emphasizing her separation from her heritage.

That “separateness” is especially poignant in “Earthward, ” one of the shorter poems in the collection. 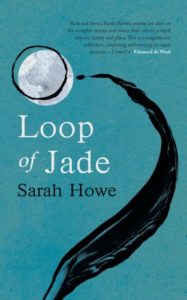 I watched the shadowplay
of trees
against the blinds
one October –
in the way sometimes
you stare
at a pale face across the bed
so long
you hardly see it –
fingers trembling,
vague as a street
at night, as nature
stripped of accident,
they shook
with a gusting stutter
more restless still
for being not
the thing itself.

Howe’s poems have appeared in Poetry Review, Poetry, PN, The Guardian (UK newspapers still tend to publish poetry), Poetry London and several anthologies. She received the Sunday Times Young Writer of the Year Award in 2015, and is currently a fellow at Harvard’s Radcliffe Institute. She is also the founding editor of Prac Crit, an online journal of poetry and criticism.

Her selection for the Eliot Prize has not been without controversy. The Guardian reported that shortly after the prize program, the publication Private Eye published a rather snarky (and anonymous) article criticizing her selection. The controversy spilled over into Twitter, which had for a brief period a trending hashtag—#derangedpoetess—following a “praise-with-faint-damn” interview with Howe by the Times Literary Supplement.

That such a controversy erupted in Britain is no surprise. Literary things, including poetry, are more noticeable (and noted) there than in the United States. And anonymous attacks are far from unknown. They take their poetry seriously. And everyone enjoys a good controversy.

Yes, Howe was up against some serious competitors for the Eliot Prize. Yes, she’s young. And yes, it’s her first collection. But the prize is awarded for a collection, not a body of work, and Loop of Jade is well deserving.

Photo by Vlastimil Koutecky, Creative Commons, via Flickr. Post by Glynn Young, author of the novels Dancing Priest and A Light Shining, and Poetry at Work.