U.K. poet Sean O’Brien is one of only two poets who have ever won both the T.S. Eliot Prize and the Forward Poetry Prize for the same collection of poetry. The collection was The Drowned Book, published in 2007, and it is unusual in that all of the poems are part of a coherent whole. Typically, poetry collections may have thematic sections or some related poems, but it’s atypical for the entire collection to be unified. O’Brien, a native of London who is currently a professor of creative writing at Newcastle University, is the author of several poetry collections. In addition to the Eliot and Forward prizes, he’s also won several other awards and recognitions. In addition to his 11 collections of poetry, he’s a critic, essayist, short story writer, novelist, and playwright. He’s also a member of the Royal Society of Literature.

In the case of The Drowned Book, O’Brien says that a major influence on the collection was the translation of Dante’s Inferno he was undertaking at the time. “The influence of the Inferno can hardly be missed, ” he says; “for instance, much of the book takes place underground and in the dark and partly underwater, as though whatever is at stake might be found by journeying through the underworld.”

The Drowned Book is more a book than it is a poetry collection. Many of the poems relate to water, and not only under water—rivers, boats, ports, lighthouses, water gardens, ferries, drains, fish, bayous and meres. This is one example: 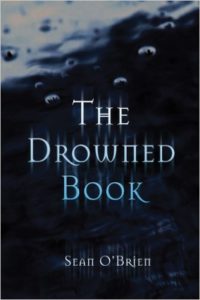 The way we’d go on summer nights
In the times we were children
And thought we were lovers.

The river road led to the end of it all—
Stones and pale water, the lightship’s bell
And distance we never looked into.

A long time gone
And the river road with it
No margin to keep us in mind.

For afterlife, only beginning, beginning,
Wide, dark waters that grow in the telling
Where the river road carries us now.

It is a poem about memory and beginnings, perhaps some regret for the “distance we never looked into” but where the river is carrying us now. It’s a beautiful poem.

O’Brien’s latest collection, published earlier this year, is The Beautiful Librarians. It’s a more traditional poetry work—a collection instead of a unified book. But the poems are written with the same stark simplicity and power of The Drowned Book. We say Next time we’ll go away,
But then the winter happens, like a secret

We’ve to keep yet never understand
As daylight turns to cinema once more:

A lustrous darkness deep in ice-age cold,
And the print in need of restoration

Starting to consume itself
With snowfall where no snow is falling now.

Or could it be a cloud of sparrows, dancing
In the bare hedge that this gale of light

Is seeking to uproot? Let it be sparrows, then,
Still dancing in the blazing hedge,

Their tender fury and their fall,
Because it snows, because it burns.

“Because it snows, because it burns” may be a nod to Robert Frost’s “Fire and Ice” but it is a lovely line to end this poem.

Both collections have poems with topical and literary allusions, not always easy for an American reader to follow. But those are few and far between. O’Brien’s poems demonstrate the merit of the prizes and recognitions he’s received, and he’s one of the finest poets writing in English today.