Published posthumously, Abide by Jake Adam York is a continuation of the poet’s project to memorialize the 126 people who died in the civil rights struggle between 1954 and 1968. Christian Wiman’s Once in the West has no title poem, instead, the book’s title is a recurring theme throughout  the poems.

The next two finalists in our discussion series continue the eclectic characterization.

Willie Perdomo has published four collections of poetry, including The Essential Hits of Shorty Bon Bon, his most recent and a finalist for the NBCC award. He’s also published works for children. In addition to fellowships from various organizations and teaching positions, he is editor and publisher of Cypher Books, self-described as “necessary poetry from cutting-edge authors.”

The Essential Hits of Shorty Bon Bon is a meditation, a conversation, a series of poems about a musician named Shorty Bon Bon. The title pays tribute Perdomo’s Nuyorican neighborhood in New York City. It also at times becomes a musical composition, with poems that sound like rap, salsa, cha cha, rumba and other musical and dance forms. You feel the beat, your foot begins to tap, and the combination of music, dance and words takes you to unexpected places. My father used to leave sharp sounds
By the door, steady conga heads were
Rare. When you party with grown-ups,
You learn not to suffer dancers a weak
Hand; otherwise a safe return to silence
Becomes less of a road—no yesterday.
The great readers, he would say, quote
From the kitchen. Yes, chops—cook,
Steam like jabs, stories, walls that sob
I’m sorry. In the middle of a sacrifice,
Death always has a shape to introduce:
Breath deflates & balloons a club like
An amateur soul drowning in whisper.

Perdomo’s poems are a concert of popular music and sharp, pointed observations.

A fourth finalist for the NBCC award is Prelude to Bruise, the debut collection by Saeed Jones. Jones, like Perdomo, lives in New York City. He’s received a Pushcart Prize and several fellowships, and has previously been editor of Buzzfeed LGBT.

Despite now living in the North, he is a child of the South, and many of his poems are about the experience of a black man growing up in the South. There is violence and sensuality and profound thought expressed in his poems. Some of the poems include individual, and personal, takes on biblical themes, like this one. 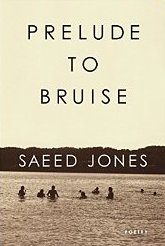 Asleep on the roof when rain comes,
water collects in the dips of his collarbone.

Dirty-haired boy, my rascal, my sacrifice. Never
an easy dream. I watch him wrestle my shadow, eyelids

trembling, one fist ready for me.
Leave him a blanket, leave him alone.

Night before, found him caked in dirt,
sleeping in a ditch; wet black stones for pillows.

What kind of father does he make me, this boy
I find tangled in the hair of willows, curled fetal
in the grove?

Once, I found him in a far field, the mountain’s peak
like a blade above us both.

The poems of Prelude to Bruise are filled with allusions to Jones’s sexuality, and also to pain, the personal pain of a boy’s and young man’s rejection by his father.

We’ve been discussing the poetry collections nominated for the National Book Critics Circle Award. First, last week we discussed we covered Jake Adam York’s Abide; Christian Wiman’s Once in the West. Next week, we’ll discuss the fifth of the five nominees,  Citizen: An American Lyric by Claudia Rankine. The winner will be announced March 12.

Photo by Nicolas Alejandro, Creative Commons, via Flickr. Post by Glynn Young, author of the novels Dancing Priest and A Light Shining, and Poetry at Work.