It was my first job out of college. I was a copy editor at a newspaper in Texas. Turnover was high, and within a few short months I was No. 2 on the copy desk. One of my tasks was sorting through all of the stories from wires services and deciding what should be included in the newspaper.

One day, in late 1973, we received a notice from The New York Times News Service. A manuscript of worldwide importance was soon to be published, and it promised enormous impact on world politics. A few weeks later, we learned what the manuscript was: The Gulag Archipelago by Aleksandr Solzhenitsyn, a detailed and documented account of life in the Soviet Union’s huge network of labor camps.

Solzhentisyn had emerged as a writer during a small sliver of freedom in the early 1960s. His novel One Day in the Life of Ivan Denisovich had been published (or approved for publication) by the Soviet magazine Novy Mir in the early 1960s (translated into English in 1963). Two other manuscripts (Cancer Ward and The First Circle) had circulated in Russia via samizdat and then smuggled out to the West. The Soviets were not pleased when Solzhenitsyn received the Nobel Prize for Literature in 1970. When the non-fiction Gulag was published in early 1974, the Soviet Union responded almost immediately by expelling the writer from the country. He made his way first to Germany, and eventually settled in Vermont, where he continued to write fiction and non-fiction and edit the next two volumes of Gulag.

While the managing editor of my newspaper wasn’t sure if this was really all The New York Times was claiming it to be, I had a better understanding. I had read Solzhenitsyn’s three novels in English while I was in college. And I knew this could pose major problems for Henry Kissinger and then-President Nixon in their efforts to achieve détente with the Soviet Union. I convinced the managing editor to publish the story on the front page of the newspaper. 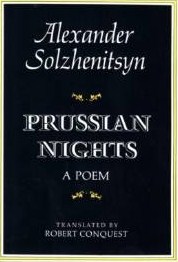 Solzhentisyn, a soldier in the Red Army as it advanced on Nazi Germany, had been arrested by the Soviets in eastern Germany in 1945. His correspondence with a friend had included poorly disguised criticisms of Joseph Stalin—not exactly the wisest thing to do at the time. He spent almost a decade in the labor camps before being released.

It was his time with the Red Army in what had been Prussia that eventually gave birth to a long poem, published as Prussian Nights in Russian (in Paris) in 1974, in German in 1976, and in English in 1977. The poem is not exactly a celebration of the achievements of the Soviet army; the word “condemnation” is not too strong. The army indiscriminately raped and pillaged its way across Prussia on its march to Berlin. Everything and anything was allowed; this was payback time for what the Nazis had done to Russia. What many of the Red Army soldiers proved was that they were no better than their Nazi counterparts.

The poem, translated into English by the historian and poet Robert Conquest, is a hard work to read. The text reads easily enough; it is what the text says that makes this an emotionally difficult work. Here’s a section called 22 Horingstrasse:

Zweiundzwanzig, Horingstrasse.
It’s not been burned, just looted, rifled.
A moaning, by the walls half muffled:
The mother’s wounded, still alive.
The little daughter’s on the mattress,
Dead. How many have been on it?
A platoon, a company perhaps?
A girl’s been turned into a woman,
A woman turned into a corpse.
It’s all come down to simple phrases:
Do not forget! Do not forgive!
Blood for blood! A tooth for a tooth!
The mother begs, “Tote mich, Soldat!”
Her eyes are hazy and bloodshot.
The dark’s upon her. She can’t see.
Am I one of theirs? Or whose?…
Doctors? Hospitals? Not for you.
Where druggists stood there’s melted glass.
The day turns gray. The snow melts too… The italicized words were official slogans used by the Soviet High Command. Rape and pillage were official policies. And all a mother can do, the corpse of her daughter next to her, is to beg the soldier to put an end to her life. Solzhenitsyn’s point: We victorious Soviets are no better than the Nazi enemy we have defeated.

It is an age-old characterization of what can happen to armies (and civilian populations) in war. Victory doesn’t necessarily connote moral superiority.

When it was published in 1977, Prussian Nights received mixed reviews. The New York Times called it clumsy. The New York Review of Books cited its power, despite its “shortcomings.” Some recognized its literary merits for what they were—the critic Clive James cited its creative power in “re-establishing objective truth in a country whose government had devoted so much murderous energy to proving there could be no such thing.”

The poem stands with the rest of Solzhenitsyn’s works in exposing myths created by the Soviet Union, myths designed to hide ugly realities of Soviet life and history. And it says, with a kind of resigned defiance, that governments cannot ultimately annihilate the human spirit.

Image by Juan Ignacio Garay. Sourced via Flickr. Post by Glynn Young, author of the novels Dancing Priest and A Light Shining, and the recently published Poetry at Work (T. S. Poetry Press).