Today, Poets and Poems considers a book by Christopher Reid: A Scattering.

You reach a certain age and find yourself thinking more about a subject you rarely consider when you’re young—death, of yourself, your spouse, your parents, your friends. It becomes a topic of conversation, and you find yourself doing regularly what used to make you smile about your parents—reading the obituaries.

When you’re 19 and immortal, this consideration of death may seem slightly bizarre. When you’re older and something less than immortal, you understand death is part of life. But sometimes it arrives out of cycle—a child, a friend, a spouse. Sometimes death comes too soon, as it did for British poet Christopher Reid.

In 2005, Reid’s wife, actress Lucinda Gane, died from cancer. She was 57. For Reid, abstract understandings of what cancer is and what it can do became all too real. He watches his wife of 30+ years grow progressively worse. Cancer and illness have moved beyond the intellectual to the emotional and personal; they become something shared that must be lived through.

Reid wrote a series of poems, A Scattering, about his wife’s illness, death and aftermath, and he wrote them for the reason any writer would—to make sense of what was happening. When sense couldn’t be made, the poem became a way and a means to acceptance. What is clear is that death isn’t the end point; death never is. Instead, it becomes simultaneously both a mid-point and a beginning, leading to a different life for the survivors, a life already hinted at in the moment of death. Consider this untitled poem:

Sparse breaths, then none —
and it was done.

Listening and hugging hard,
between mouthings
of sweet next-to-nothings
into her ear —
pillow-talk-cum-prayer —
I never heard
the precise cadence
into silence
that argued the end.
Yet I knew it had happened.

Gingerly, as if
loth to disturb it,
I released my arm
from its stiff vigil athwart
that embattled heart
and raised and righted myself,
the better to observe it.

Kisses followed,
to mouth, cheeks, eyelids, forehead,
and a rigmarole
of unheard farewell
kept up as far
as the click of the door.

After six months, or more,
I observe it still. 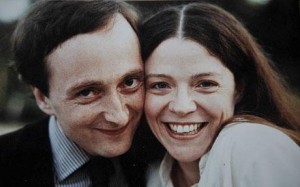 After the end comes the beginning. What Reid now faces is the aftermath and grief. The poems avoid the stages of grief; in a real sense, grief is not about stages at all. Stages sound clinically accurate and humanly absurd. Instead, the poems are about going forward, and going forward with a gaping wound. Loss of a loved one is less about putting one foot in front of the other and more about convincing oneself to get out of bed in the first place.

What Reid knows and expresses in these poems is this: you don’t “survive” the death of a beloved spouse; you change. And what follows continues to be shaped by the one you’ve lost and the love you’ve shared.

Reid is the author of some 15 collections of poetry, two children’s books, and five collections and anthologies (he served as editor of the collected letters of poet Ted Hughes). A Scattering received the Costa Book Award for best poetry book of the year in 2009 and best overall book of the year (Reid was the first poet since Seamus Heaney to take the overall award).

Honest and often pointed, the poems of A Scattering read true. They were born in loss, a loss that seems almost unimaginable, but they honor that loss and the person who was there before.

Image by mycatkins. Sourced via Flickr. Post by Glynn Young, author of the novels Dancing Priest and A Light Shining, and the forthcoming Poetry at Work (T. S. Poetry Press).