Maureen Doallas, author of the newly published Neruda’s Memoirs: Poems, was kind enough to talk with us about her background, her experience in writing and poetry, and related areas.

Was there a time or event or class (or person) where you knew you had come to love poetry? Was it in college or earlier?

I feel fortunate that I grew up in a house full of books. Though both my mother and father had limited educations, they knew the value of being informed and educated, and instilled in us a love of learning. My mother was and at 83 still is an omnivorous reader. She always allowed me to buy as many books from Scholastic as I wanted; I usually ordered them all. One shelf in our house contained collections of writings by Nobel Prize winners in literature and I read every one. I have the books now. The range of books we had included everything from history to short stories. We had also what I recall were first editions of fiction writers (I read Le Carre’s The Spy Who Came In From the Cold when I was still in grammar school). Not so much poetry, except for volumes common to any library sold door to door in the late ’50s and early ’60s.

I would say that my interest in poetry became most serious when I began to study Spanish in 7th grade and discovered Pablo Neruda and other great Spanish poets. I carried that interest into studies in Spanish and Italian in college.

You spent a long career in writing and editing (and how you find things online is simply amazing). Do you think this has shaped your poetry?

I started out as a reporter for a local newspaper and then did freelancing for a time until I needed to earn a higher and more stable income. I have a background for both government and private institutions in editing political, educational, international health care, and employment law publications. I also wrote many newsletter articles in the job from which I retired.

I think I am skilled at mining for information. Partly that’s because I’m not content to ask the same questions others might and partly because I’m curious. In college I learned how to write book-length manuscripts based on notes taken on 3″x5″ cards, and we were required to use only primary (original) sources. I worked while in college for several professors who depended on my ability to gather information. 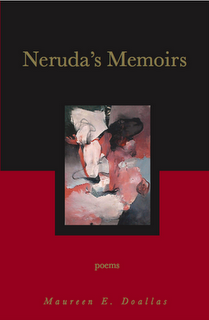 I wouldn’t say that what I did for a living shaped my poetry. My breadth of interests and curiosity, however, certainly informed what I read. I was and continue to be drawn to biography, and I like to write or try to write poems that draw on real-life facts.

How has writing shaped you as a person?

There is no period in my life when I haven’t been writing something, so in that respect, writing shaped my life because it’s always been a part of my life as an adult. What’s funny is that when I was in grade school I wanted to be a musician. I even entered a Mattel Corp. essay contest in which I wrote about how much I loved music. I think I was 9 at the time, and my essay earned finalist status. It was then that I realized I my strengths were in writing. Being a poet wasn’t what I had in mind. I wanted to be a war correspondent or at least a great newspaper reporter. After that, I pursued writing and did the requisite stint on my high school newspaper, where I was assistant editor and something of a renegade.

I took up formal study of poetry in college, though then one couldn’t major in a “craft, ” as it was called, so my English studies at Vassar necessarily and primarily were in subjects like Chaucer, Shakespeare and medieval narrative. I got to bypass all the required freshman English courses, thanks to writing samples I’d submitted. I took my first poetry class in sophomore year. My instructor was a Sylvia Plath scholar and all the others students were juniors and seniors; I was intimidated but held in there. My senior year work – in poetry, my first manuscript – was with a fabulous and much-loved professor. I continued to write poetry after graduating, sharing my work for a while with my professor. I married in my 30s, in 1984, and had my son in 1988. I wrote and edited all day while at work and when I got home rarely took up my creative writing except for writing poetry for special occasions. In 2007, after retiring, I went back to poetry-writing seriously.

Do you have favorite poets? Do you read mostly contemporary poets or also the poets of the past?

I read broadly and deeply, so it’s difficult to say I favor poets in my reading; I take something from every poet I read. However, if I could take only two with me to a desert island, the two probably would be Pablo Neruda and Mahmoud Darwish, and, for good measure, Rumi. I would have to say I am most drawn to modern and contemporary poets.

Can you recall the first poem you read or had read to you?

I cannot recall the first poem read. I have a lousy memory for that kind of thing.

You have a tremendous love for art. How do you think that has influenced your poetry?

Poetry goes hand in hand with life. I can’t imagine not reading poetry any more than I can imagine living without visual and other forms of art. They are different media for expression but both show and teach a way to see.

I was born in Arlington County, Virginia. I’m one of those rare “natives” you hear about in the Washington, D.C., area. I grew up in Fairfax County. I applied to only three colleges/universities: Barnard College in New York City (now part of Columbia), University o f Missouri journalism school, and Vassar College. I was fortunate to have my pick of the three and settled on Vassar because the campus is extraordinarily beautiful and is a short train ride to New York City, because it had and has a magnificent history of educating women of incredible achievement, and it offered me a scholarship. I nixed Barnard because I wanted no part of looking for housing on my own and was not offered a scholarship, and Missouri because I decided I didn’t want to be at a large institution where fraternities and sororities had importance. As it turned out, I went to Vassar at a time when the college was becoming co-ed; I knew two years of what could be described as the “old” Vassar, when there were mostly women on the campus, and two years when the presence of men was creating all kinds of change.

I was a features reporter for a local paper and freelanced after college. I also worked summers at Wolf Trap Farm Park for the Performing Arts. The first year after college I lived with my brother in Virginia. When I saved enough money to get out on my own, I began a long career in editing and writing. I worked first for a group associated with Georgetown University, next for an education-related organization that undertook projects with U.S. colleges and universities, next with an international public health organization for which I edited international health program papers and project reports that went primarily to USAID and the UN, and finally to an employment law publisher where I spent almost 25 years. There was no poetry in the work but I still have friends from those jobs and made a good living applying my writing and editing skills.

Maureen talks more about the poems and her background at The High Calling.

She also discusses the process of publishing the book at Faith, Fiction, Friends.

Diane Walker, a friend of Maureen’s, reads the title poem in a video she created for the book.

The Assumption of the Virgin by Randall David Tipton is the art used for the cover of Neruda’s Memoirs. (It’s also available as a limited edition print.)