The Chimney Sweeper (from “Songs of Innocence”)

When my mother died I was very young,
And my father sold me while yet my tongue,
Could scarcely cry weep weep weep weep.
So your chimneys I sweep & in soot I sleep.

There’s little Tom Dacre, who cried when his head
That curl’d like a lambs back, was shav’d, so I said.
Hush Tom never mind it, for when your head’s bare,
You know that the soot cannot spoil your white hair.

And so he was quiet, & that very night,
As Tom was a sleeping he had such a sight,
That thousands of sweepers Dick, Joe, Ned & Jack
Were all of them lock’d up in coffins of black,

And by came an Angel who had a bright key,
And he open’d the coffins & set them all free.
Then down a green plain leaping laughing they run
And wash in a river and shine in the Sun.

Then naked & white, all their bags left behind,
They rise upon clouds, and sport in the wind.
And the Angel told Tom, if he’d be a good boy,
He’d have God for his father & never want joy.

And so Tom awoke and we rose in the dark
And got with our bags & our brushes to work.
Tho’ the morning was cold, Tom was happy & warm,
So if all do their duty, they need not fear harm. 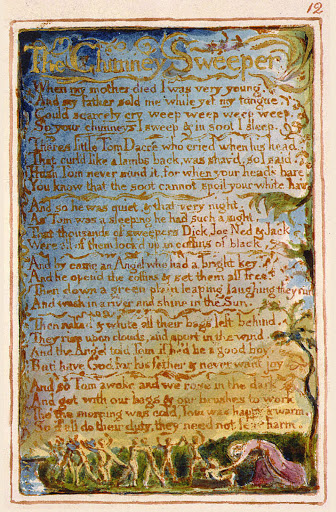 Listen to “The Chimney Sweeper,” by William Blake, Readings

Watch Videos for the Poem

Listen to “The Chimney Sweeper,” by William Blake, Music

Watch An Original Animation Inspired by “The Chimney Sweeper”