Introduction to the Songs of Innocence

Piping down the valleys wild
Piping songs of pleasant glee
On a cloud I saw a child.
And he laughing said to me.

Pipe a song about a Lamb;
So I piped with merry cheer,
Piper pipe that song again—
So I piped, he wept to hear.

Drop thy pipe thy happy pipe
Sing thy songs of happy cheer,
So I sung the same again
While he wept with joy to hear

Piper sit thee down and write
In a book that all may read—
So he vanish’d from my sight.
And I pluck’d a hollow reed.

And I made a rural pen,
And I stain’d the water clear,
And I wrote my happy songs
Every child may joy to hear.

“Introduction to the Songs of Innocence” by William Blake Original Illustration

William Blake would run his prints in black and white. Then he would color them by hand. 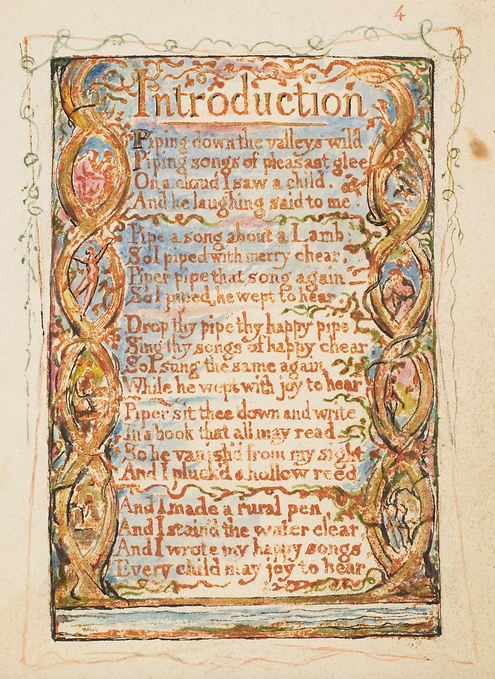 Listen to a Poem Reading

Listen to “Introduction to the Songs of Innocence” Music