I dwell in a lonely house I know
That vanished many a summer ago,
And left no trace but the cellar walls,
And a cellar in which the daylight falls,
And the purple-stemmed wild raspberries grow.
O’er ruined fences the grape-vines shield
The woods come back to the mowing field;
The orchard tree has grown one copse
Of new wood and old where the woodpecker chops;
The footpath down to the well is healed.
I dwell with a strangely aching heart
In that vanished abode there far apart
On that disused and forgotten road
That has no dust-bath now for the toad.
Night comes; the black bats tumble and dart;
The whippoorwill is coming to shout
And hush and cluck and flutter about:
I hear him begin far enough away
Full many a time to say his say
Before he arrives to say it out.
It is under the small, dim, summer star.
I know not who these mute folk are
Who share the unlit place with me—
Those stones out under the low-limbed tree
Doubtless bear names that the mosses mar.
They are tireless folk, but slow and sad,
Though two, close-keeping, are lass and lad,—
With none among them that ever sings,
And yet, in view of how many things,
As sweet companions as might be had. 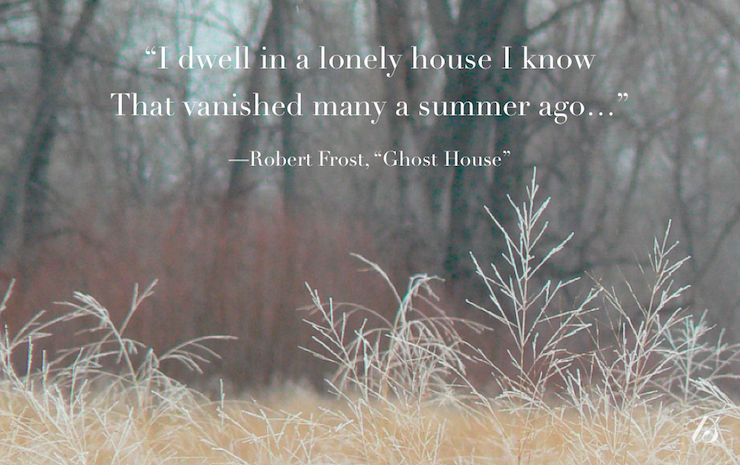