The elegy is a poetry form with roots in Classical Greece and Rome. It is a poem of loss and mourning, but it often ends with some sense of hope. Traditionally, it has three sections — lament, tribute, and consolation. Some of the best elegies have a musical sense about them; the elegies of the ancient Greeks were usually accompanied by the playing of lutes. The best-known elegy in contemporary times is one written some 280 years ago. It’s the best known because so many of us studied it in high school, and, for a long time, it was also a popular poem for students to memorize. Thomas Gray published “Elegy Written in a Country Churchyard” about 1742 after a friend “leaked” a copy to a few others. It was immediately popular, even among Gray critics like Samuel Johnson. The surprise, perhaps, is that it remained popular for such a long period of time.

The poem is believed to be in tribute of Gray’s friend and fellow poet, Richard West, who had recently died at the untimely age of 26. Gray had already written a sonnet about his friend. Reading the elegy now, I’m struck by two things. First, it conveys a sense of motion and movement. And second, that motion may be the key to understanding how musical the poem seems.

Gray is sitting in the graveyard of a small village church and considering the graves and memorials surrounding him, and the people buried and memorialized there. I believe I knew it before, but the first line of this section leaped out. Far from the madding crowd’s ignoble strife,
Their sober wishes never learn’d to stray;
Along the cool sequester’d vale of life
They kept the noiseless tenor of their way.

Yet ev’n these bones from insult to protect,
Some frail memorial still erected nigh,
With uncouth rhymes and shapeless sculpture deck’d,
Implores the passing tribute of a sigh.

Their name, their years, spelt by th’ unletter’d muse,
The place of fame and elegy supply:
And many a holy text around she strews,
They teach the rustic moralist to die.

This is where Thomas Hardy drew the title of his novel (1874). In these few lines, I can also see the long-lasting appeal of the poem. The rhythm and rhyme lend themselves to reading aloud and memorization, but Gray is also speaking to the universal. Death comes for all of us, and memory lasts for a time in a place like a country churchyard. 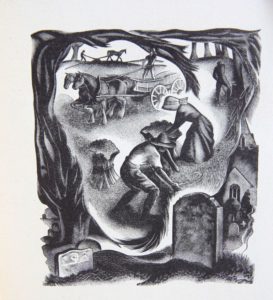 One of the 1938 illustrations

Oxford’s Bodleian Library has published a new edition of the poem, one that is itself a work of art. Less that 50 pages complete, with a fine if understated binding, the poem is introduced by Carol Rumens, an accomplished British poet with 14 published collections and a weekly column (“Poem of the Week”) for The Guardian newspaper. Each four-line stanza of the poem has its own page, accompanied by a wood engraving by Agnes Miller Parker (1895-1980).

Born in Scotland, Parker attended the Glasgow School of Art and taught at the school for a time. She and her painter husband William McCance taught and worked in Scotland, England, and Wales. The wood-carved engravings for “Elegy Written in a Country Churchyard” originally accompanied an edition of the poem published in 1938. As Rumens points out in the introduction, Parker’s illustrations are both realistic and stylized. She’s captured the music and motion of poem.

This new edition by the Bodleian is not available on Amazon, although your bookstore can likely order it. It’s a beautiful work in its own right, a book that I would not be incorrect in calling a work of art in itself. By combining the beauty of the poem and the beauty of the illustrations, and positioning the stanzas on the individual pages, the Bodleian has created something beyond an illustrated poem.

Related: Thomas Gray and the Elegy