I’ve lived in Missouri for 43 years, longer than I’ve lived anywhere else. But it’s Louisiana that I still think of as home, or my home state, the one I physically left when I was 21.

I follow the news about hurricanes in the Gulf of Mexico. I read stories about the crime rate in New Orleans. I pay attention when I hear about new French Quarter restaurants, or old ones closing. I drink Community Coffee (Signature Blend), whose company is headquartered in Baton Rouge. When I eat a shrimp po-boy sandwich, I always compare it to the Shrimp Po-Boy served at the Come Back Inn in Metairie, the suburb of New Orleans where I grew up. The only football team I follow is LSU.

Tania Runyan left California more than 20 years ago, and she’s still coming to grips with her home state. She tells her story in Making Peace with Paradise. 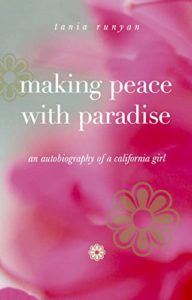 She writes about five general subjects, all identified with or strongly associated with California: earthquakes, freeways, the suburbs (she grew up in Orange County), the Beach Boys, and movie stars and celebrities. When you’re a child, you don’t think of your “place” or geography as necessarily different. It’s only as you grow older that you realize that Orange County, for example, is fundamentally different from Cook County, Illinois, or Jefferson Parish, Louisiana.

Of course, in Runyan’s case, she had to consider the reality of earthquakes. She experienced her first one as a child, and, being a latch-key kid, became terrified of one happening while she was home alone after school. She amplifies the story by describing her mother’s large collection of glass figurines, and the one she experienced as a high school sophomore that convinced her that the “big one” was imminent. She describes her move to Ohio at 21 as being “five months after the Northridge quake of 1994.”

I realized she was describing her life with earthquakes like I described life with hurricanes.

Runyan describes life with (or, or accurately, on) freeways as “presences” full of sheer drama. She is not making this up; I’ve driven southern California freeways, not to mention Houston freeways for five years. When we moved to St. Louis, it was not by accident that our first home was a mile from where I worked and requiring no freeway commuting. And California invented, developed, and perfected the entire concept of suburbs; her description of suburban life is both apt and fully recognizable.

Her essay on the Beach Boys is a classic — and my favorite in the book. (Unlike Runyan, I loved their music when I was a teen, and I still do; it took her half a lifetime to get there.) Like the other chapters, it’s about more than the music — it’s the beach scene for which California was famous, adolescence, Runyan wearing her first bikini and risking the dread skin diseases her mother warned her about, the boy she had a crush on, and how she came to appreciate the music she’d so disliked. And if California is about movie stars (and it is), then Runyan tells her own glimpse of film glory — the one that, years later, she had to search diligently for to see that image of a girl raising her victory fist at a graduation ceremony. It wasn’t 15 minutes of fame; it was more like three blurry seconds of fame. That’s also the story of the vast, vast majority of us.

Runyan is the author of several poetry collections, including What Will Soon Take Place, Second Sky, A Thousand Vessels, Simple Weight, and Delicious Air, which was awarded Book of the Year by the Conference on Christianity and Literature in 2007. Her instructional guides, How to Read a Poem and How to Write a Poem, are taught in schools across the country. Her poems have been published in such publications as Poetry, Image, Atlanta Review, Indiana Review, The Christian Century, Southern Poetry Review, and the anthology In a Fine Frenzy: Poets Respond to Shakespeare. She was awarded an NEA Literature Fellowship in 2011, and she served as Tweetspeak Poetry’s Poet Laura in 2019.

Making Peace with Paradise is about growing up in California, but it’s also, like the best memoirs, more than that. It’s about the rest us, no matter where we grew up — our loves, our terrors, our triumphs, and our humiliations. Runyan is as kind as she is funny, and she excels at self-deprecating humor, the best kind. Read her story and experience your own childhood and growing up.

An Ode to Poetry: How to Write a form Poem by Tania Runyan

Poets and Poems: Tania Runyan and What Will Soon Take Place