Shane McCrae gives a young boy a voice – and a life

In his latest collection, Sometimes I Never Suffered, poet Shane McCrae tells a story. Or perhaps he’s telling several stories that are different threads of the same story. Thirty-six poems become one poem, and one story, and they do what good poetry always does — leave the reader unsettled and reflecting upon something new in the reader’s experience. The story also leaves the reader wondering what might happen and what should happen.

McCrae uses a historical figure, Jim Limber, to tell his story. Limber was a young boy of mixed race who was brought into the household of Jefferson and Varina Davis in Richmond, Virginia. He lived with the Davises from February 1864 to May 1865, when the family was captured by Union troops in Georgia. He was taken from the family, and the facts of his life after that are not fully documented. It seems he lived for a time with a Union general in occupied Charleston and was sent north for his education.

But that is as much as anyone knows about the boy. What happened to him later, when he died, and where he was buried are all unknown.

In Sometimes I Never Suffered, McCrae gives the boy a life and a history. Limber begins as an angel, “hastily assembled” by other angels in heaven and sent to earth. McCrae creates his own version of the genesis story for Limber, and then tells the story of his life with the Davises, his abduction by the federal troops (and how he “fought mightily” against them), and what happened afterward.

Jim Limber Tells the Truth About His Fate 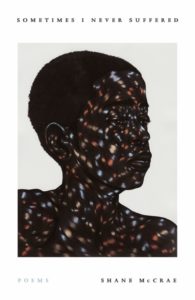 In the life of this boy, the poet sees something larger than the life of a child caught up in the upheaval and destruction of the Civil War. Others have created stories about Limber. A children’s book, Jim Limber Davis, A Black Orphan in the Confederate White House, was published by Rickey Pittman, and Charles Frazier, author of Cold Mountain, includes the boy’s story in his novel Varina. But in this poetry collection, Limber is a fully realized, even if hastily assembled, adult, telling his own story.

McCrae’s poetry collections include The Gilded Auction Block; In the Language of My Captor, which won the Anisfield-Wolf Book Award for Poetry; The Animal Too Big to Kill; Forgiveness Forgiveness; Blood; and Mule. Sometimes I Never Suffered was shortlisted for the T.S. Eliot Prize. He’s received a Whiting Award, a National Endowment for the Arts Fellowship, and a Guggenheim Fellowship. He’s an associate professor of writing at Columbia University and lives in New York City.

The poetic story of Jim Limber becomes larger than its subject. In McCrae’s hands, Limber is the story of his people, imagined and told by himself and not by others. McCrae gives this boy a personality, an adulthood, a history, and a voice he ever had the opportunity for in real life.

Shane McCrae talks about his work and Sometime I Never Suffered