I’m excited to include the work of John Stevenson, one of the movers and shakers of the haiku world (and what a rich world it is) in the pages of How to Write a Form Poem.

Reading a Stevenson haiku is like allowing a single, resonant bell to ring and spread its waves to spread across your mind. The following Stevenson haiku appears in the book:

a deep gorge …
some of the silence
is me

I keep returning to these lines, feeling something a little different each time. That’s the power of a good haiku. It acts as a mirror of sorts, or perhaps a prism, changing with the light and glance of the moment.

John Stevenson (JS): I had been writing and publishing poems for over thirty-five years before I heard my first haiku. Even then, it didn’t come from poetry circles but from an international theatre gathering. A Japanese actress shared her favorite poem with me—a Bashō haiku. I was impressed with how much could be suggested with so few words. On the theatre side, I have long been fascinated by Samuel Beckett’s progressively condensed dramas.

JS: I try everything and anything I like. Since encountering haiku, I’ve also written extensively in haikai-related forms: senyu, tanka, renku, haibun, haiga, etc. Regarding choosing what to write: it’s instinctive now but, at one point, I noticed that an inspiration would begin in my mind with the idea that “that’s something.” And if I could say what that something was, this would be the beginning of a longer poem, in which I would elaborate, riff and perform. But if that sensation of “something” stayed like that, without resolving into ideas, that would be the beginning of a haiku.

Well, ironically, the form of a haiku is the aspect that translates least effectively from Japan and Japanese to other cultures and languages. Before reading deeply in English-language haiku we often have the idea that haiku is defined as a form—17 syllables, in three lines of 5, 7 and 5. This is loosely related to the Japanese poem but, even in Japan, it would not serve as a definition of haiku since other poems have exactly the same structure (e.g. senryu) and all traditional Japanese poetry is based upon combinations of five and seven sounds/symbols. A Japanese reader can tell the difference between a haiku and other similarly structured poems with ease but that distinction is based not upon form but upon other matters; things like emotional tone, the use of traditional seasonal content, the way in which the poem is “cut” into two parts and the manner in which those parts relate to each other.

A 17 syllable English-language poem will almost always take longer to recite and contain more “hard” information than a Japanese haiku. It, therefore, can seem to tell too much and suggest too little to work in a haiku way.

Having said all of that, form is an important element of English-language haiku. But we can’t use a single form as definitive. An English poem of seven to eleven syllables is likely to be closer to the vocal length and information content of haiku as it originated in Japan. Many English-language haiku poets have begun to write in a single line (either horizontal or vertical) because a Japanese haiku is most often published as a single vertical column of characters.

Insofar as there is a “rule” about the form of English-language haiku it is probably a combination of “form serves function” and “less is more.” 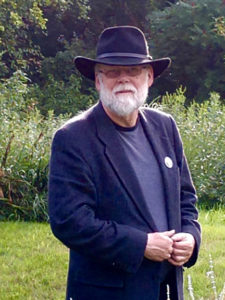 Stevenson was born in Ithaca, New York, and now lives near Albany. He is a former president of the Haiku Society of America, former editor of Frogpond, and currently serves as managing editor of The Heron’s Nest. He is a founding member of the Route 9 Haiku Group, which has published the semiannual anthology Upstate Dim Sum since 2001.