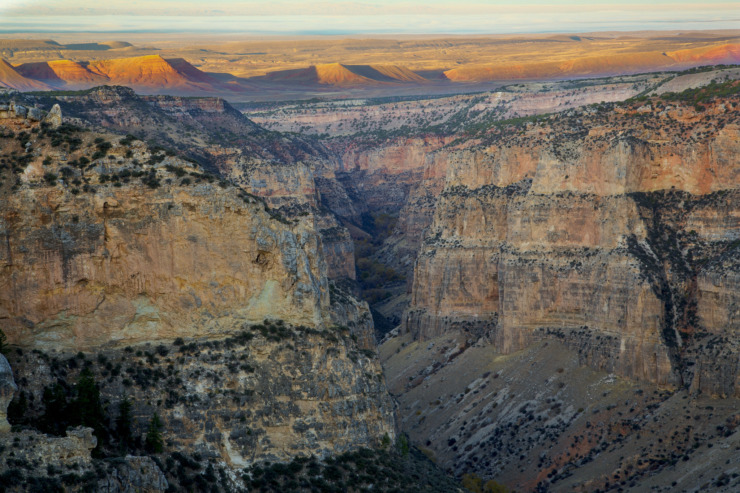 He retired as chief of the fish division for Wyoming Game and Fish after spending his entire career with the organization. His kids once referred to him as “Boss of the Fishes.” Among his other duties Uncle Mark oversaw the Cutt Slam, an ongoing challenge to catch all four species of native cutthroat trout in the state’s waterways. I have my dad’s Cutt-Slam certificate, signed by my uncle. It is one of my treasures. My dad, fly-fishing in Wyoming.

Wyoming is known both as the Cowboy State — the state symbol is a cowboy on a bucking bronco — and the Equality State, because it was the first place to grant women the right to vote, in 1869. (This measure was taken to ensure that the population would have enough voters to qualify for statehood.) Half the land in Wyoming is public land — national forests and parks, national monuments, wildlife refuges, and fisheries. Its state flower is the red prairie fire and its state bird is the western meadowlark (same family as blackbirds and orioles, but its chest feathers are egg-yolk yellow). Wyoming is a glorious, otherworldly place. When trappers and prospectors reported the wonders that are contained in what we now know as Yellowstone National Park, some papers wouldn’t print their descriptions, claiming they were fabricated. Who knows what they would have done with the tales from Wyoming’s fishermen.

The cutthroat trout is related to the rainbow trout. This particular variety is also the state fish of neighboring states Idaho and Montana. The cutthroat trout likes cold water. It has a splash of orange. The species in the Snake River around Jackson Hole is said to be resistant to a deadly parasite. In 2010 I went to Jackson for a family wedding, and the day before the big event, we went rafting on the Snake with local Jackson folks, one of whom was the groom). I have never felt so scared and so safe simultaneously. I’m hoping to go back this summer.

I’ve written a poem about my dad fishing for cutthroat trout after Mom died. I am puzzled as to why I like to write about fish but do not like fishing. There’s something I can’t resist about color moving through cold water. I don’t want to catch this wildness or eat it or even take a picture of it — just write about it, so frigid and free.

I did find this clue to my fascination in one of my journals:

I think I should title this haiku “Cutthroat Trout,” don’t you?

Use any of the things you learned about Wyoming (research more, if you want!), and put one or more of them into a poem. If you like, weave in a little generosity. Share in the comments.