My parents were married on September 9, and Labor Day weekend meant they headed west for at least three weeks. There were fish to be caught. With a fly rod.

I wrote in The Joy of Poetry about how my mother came to fly fishing late in life and how after she died, my dad headed still west, but with with other fishing buddies, until it became too far to travel alone. Now he and I live side by side, and both of us want to drive until we find that slippery fish called fall. We might need to go all the way to Montana, where Norman Maclean’s A River Runs Through It is set. 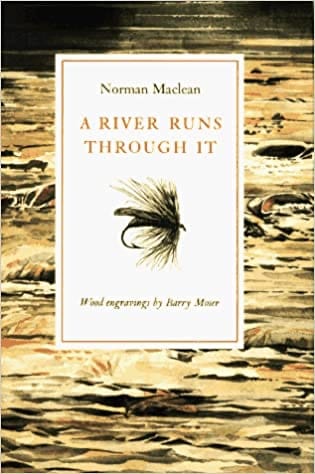 This is the copy I own, with wood engravings by Barry Moser.

William Stafford, the poet who wrote A Ritual to Read to Each Other, our poem guide since 2020 dawned, was a poet of the American West. His poems “most often take place on a mountainside, a riverbank, or a roadside—‘near an exit.’” On the very first page of this novella, we learn the story takes place at the “junction of great trout rivers.”

In a 1981 Esquire profile of Maclean, Paul Dexter wrote of A River Runs Through It, “It is the truest story I ever read; it might be the best written.”

It was published as fiction, the first fiction title ever released by University of Chicago Press, where Norman Maclean spent his career. It was considered for the Pulitzer Prize in 1977, but no prize was awarded that year. Perhaps because this book reads like memoir. The narrator is Norman, who also had a brother named Paul and a father who was a Scottish Presbyterian minister. The line between memoir and fiction is no more clear than the the sentence that begins the book — “In our family, there was no clear line between religion and fly fishing.”

I never tire of this story. I never catch my limit. It is beautiful. It is not always good. It is True.

You like to tell true stories, don’t you?” [my father] asked, and I answered, “Yes, I like to tell stories that are true.”

Then he asked, “After you have finished your true stories sometime, why don’t you make up a story and the people to go with it?

Only then will you understand what happened and why.

It is those we live with and love and should know who elude us.”

I think that is why Maclean wrote this story, to understand. And yet what he finds in the telling is Mystery.

There is this idea that reading fiction helps us. Then it should follow that writing fiction must also help us. Maclean did not write this story until he was in his 70s. I think it eluded him until then.

Recently, Glynn Young and I were discussing Dancing Prince, the last book in his Dancing Priest series, and we talked about the sometimes-thin line between fiction and memoir. He said some of the relationships in the series were influenced by relationships in his own life (although, of course, Glynn has never been a member of the British royal family). That must be why the books read so true.

I have decided against writing memoir. I have never tried fiction. Perhaps I should wait until I am 70-something. But I have written hundreds of poems. Which are about those I live with and love, who elude me? All of them. I hope some are true.

Dad plans all day for what will be a one-hour trip
tying flies
gathering vest, hat, waders, net.

We drive our gear down the mountainside
to fish this Wild and Scenic River,
the Rio Grande.

“Where’s your pole” Dad asks.
I hold up a bamboo pole (5 bucks at the gas station).
He frowns, “I’ll go help your mother.”

Fly fishing is the only time she is quiet.
Dad arranges everything just so,
just the way she likes it.

The air is cool, but not
the midday sun. Mosquitoes
everywhere.

Me and my cheap pole can’t fish and I can’t
care as I stand in the freezing river and watch Mom
watch the water.

Dad watches her
cast her line despite the tumor deep in her eye
turning the waves sepia.

Still she is the first to spy
the cutthroat trout
darting right toward Dad.

He sets the hook. Keeps
the tension. Extends the net.
“Get the camera!” he yells.

I drop my pole, paw through Orvis bags but
no camera.
Mom quotes the psalm

as if her Bible were open
beside the riverbank:
He catches the helpless and drags them off in his net.

Dad returns the trout to its home.
He will load up his flies again
but she will not. The Good Lord

will scoop her up
after this tumor connects with the others,
forms a net.

When Dad returns
he will catch another cutthroat.
Snap a photo. Let it go.

from The Joy of Poetry

Poetry
Still Pilgrim, Angela Alaimo O’Donnell (I’ve been writing haiku with this one all August and will be writing sonnets with it all September)

Adult
Waiting for Neruda’s Memoirs, Laura Boggess (part of our fall workshop)
The Name of the Rose, Umberto Eco (abandoned)
A River Runs Through It, Norman Maclean
The Power of Ritual, Casper ter Kuile

1. Have you read a memoir or fiction-posing-as-memoir that resonated with you?
2. What book do you return to? What have they had to say in different seasons of your life?
3. Share your August pages. Sliced, started, and abandoned are all fair game.