After occupying the literary heights in 19th century America and beyond, Henry Wadsworth Longfellow (1807-1882) became the figurative statue to topple for literary critics in the early and mid-twentieth century. And topple him they did, with a bevy of prominent literary critics dismissing the poet as unworthy of the literary canon. Proponents of the “isms” — like Modernism and the New Criticism — banished Longfellow from any serious consideration.

Yet millions of Americans loved this poet, whose works became bestsellers in the United States, who outsold Robert Browning and Alfred Tennyson in England, who was translated into dozens of languages in his lifetime, and who occupied the pinnacle of the American literary establishment for several decades. 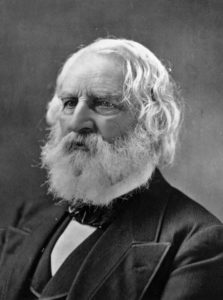 Sentiment changed, beginning in the late 1950s, says biographer and author Nicholas Basbanes in Cross of Snow: A Life of Henry Wadsworth Longfellow. In 1959, Howard Nemerov edited a volume of Longfellow’s poetry. Other poets and writers began to write appreciative books and essays. His rehabilitation was assured with an essay in 1993 by poet Dana Gioia. A long and overdue examination of Longfellow’s poetry was well underway. So, too, was the contribution made by his second wife, Frances (“Fanny”) Appleton Longfellow (1819-1861). And it is understanding and chronicling that relationship and dynamic that Basbanes undertakes in Cross of Snow.

Fanny is most famous for being Longfellow’s wife (his first wife died from complications after a stillbirth) and for her tragic death in 1861, after a candle caught her dress on fire. Longfellow desperately tried to extinguish the fire, burning his own hands in the process. He was heartbroken for the remaining 21 years of his life. Basbanes argues, however, that she should be recognized and remembered for her first-rate literary mind and how she contributed to Longfellow’s work.

He examines her own letters and journals as well as contemporary accounts to suggest that Fanny Longfellow exerted significant influence on her husband’s literary output. The title of the book, in fact, is taken from the title of a poem Longfellow wrote for his wife in 1879, 18 years after her death. In the long, sleepless watches of the night,
A gentle face — the face of one long dead —
Looks at me from the wall, where round its head
The night-lamp casts a halo of pale light.
Here in this room she died; and soul more white
Never through martyrdom of fire was led
To its repose; nor can in books be read
The legend of a life more benedight.
There is a mountain in the distant West
That, sun-defying, in its deep ravines
Displays a cross of snow upon its side.
Such is the cross I wear upon my breast
These eighteen years, through all the changing scenes
And seasons, changeless since the day she died.

This is the kind of book that comes along all too rarely. I was barely halfway through the introduction when I realized what a pleasurable experience it is to read a book like this. Basbanes’ admiration for Longfellow and his poetry is equaled by his admiration for Fanny. His goal is not to tear down, or even to build up, but to explore, explain, and reach a new, deeper level of understanding. The research behind the book is enormous, but the research informs the narrative; it doesn’t dominate it. The author explores the importance of several trips to Europe for both Longfellows (they actually met in Switzerland, even though they lived within a few miles of each other in the Boston/Cambridge area). And friends and acquaintances move across the book’s pages, including Charles Dickens, Nathaniel Hawthorne, Julia Ward Howe, William Cullen Bryant, and many more.

Basbanes is also the author of On Paper, Patience & Fortitude, A Gentle Madness, and several other works of cultural and literary history. An award-winning investigative journalist, he was the literary editor of the Worcester Sunday Telegram and received two fellowships from the National Endowment for the Humanities. He lives in Massachusetts.

Related: “A Beautiful Ending: On death and heaven in the time of Longfellow” by Nicholas Basbanes.