I first read The Scarlet Letter by Nathaniel Hawthorne (1804-1864) 50 years ago. I recently reread it and discovered it was nothing like what I remembered, or what I thought I remembered. Superficially, the book tells the story of a woman in Puritan Boston who gives birth out of wedlock, is shunned and condemned by her fellow citizens, and thumbs her nose at them by embroidering a scarlet letter “A” on her dress.

The novel is actually much more substantive — the story of a woman of rather independent mind caught between the opposing demands of her lover and those of her husband. It’s an exploration of guilt, love, steadfastness, loyalty, and redemption. 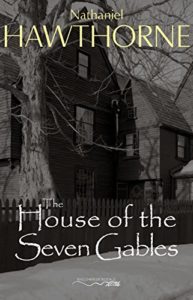 I wondered if the same thing would be true of Hawthorne’s The House of Seven Gables, which I first and last read about that same 50 years ago. What I remembered was a ghost story of sorts, not as wild as an Edgar Allan Poe story but in that vein. I reread it last month and discovered that memory misled me even more than with The Scarlet Letter. It’s what the Romantic and Victorian eras called a “gothic romance,” to be sure. And it has a mystery embedded in its core. But it is decidedly not a ghost story. It is more of a “the past is always with us” story, with the emphasis on ancestral guilt strangling families through the generations. If there’s a ghost, it’s that sense of guilt.

Hawthorne tells the story of the Pynchon family, whose history in Salem stretches back to before the witch trials. That history begins with an injustice. A Pynchon was a witch trial judge, and he condemned a man named Maule to death for witchcraft. It just so happened that Maule’s home sat on property that Pynchon wanted, and took. The Pynchons built their large home on the land, and the house was notable for its seven gables. Over the decades, it also became known for its gloominess and gradual physical decline.

It’s occupied by Hepzibah Pynchon, an elderly lady who’s approaching the end of her financial means and is forced to open a penny shop, or general store, in the house. She has a lodger, Holgrave, a young photographer who’s something of an artist.

Hepzibah’s cousin is also a Judge Pynchon, and she doesn’t trust him. (Hawthorne makes sure the reader doesn’t trust him either.) He says all the right things, he’s involved in all the right causes and town projects, and he may be looking beyond Salem for making a change in his officeholding status. But there’s something oily about the man. He’s always been interested in the old family Holy Grail of a missing real estate deed, one that would have given the family ownership of a large tract of land in what is now Maine. Daily life at the house changes first with the arrival of a young cousin from the country, Phoebe, who breathes fresh air into the house’s rooms and Hepzibah’s life. Then Clifford Pynchon, Hepzibah’s dearly loved and now elderly brother, returns after a long absence. Eventually the reader understands that Clifford has been in prison for most of his life, and the current Judge Pynchon seems to have something to do with it.

Hawthorne then begins to stir the pot, pushing the lives of everyone into upheaval.

The story is filled with extensive descriptions of the house and its atmosphere. The past hangs heavily over the house, and the gloom of the interior is a metaphor for the gloom that seems to be slowly suffocating the family. Will what really happened to Clifford be revealed? Will the missing real estate deed, if it truly exists, be found? Will Judge Pynchon be victorious in his quest for the deed and his desire to persecute Clifford?

The House of Seven Gables was published in 1851, not long after The Scarlet Letter. The book actually sold better than its bestselling predecessor, and Hawthorne told friends he actually liked it better. The setting was loosely based on a real home in Salem, the Turner-Ingersoll House, but in Hawthorne’s day it only had three gables (the original house had been modernized and the other four removed). 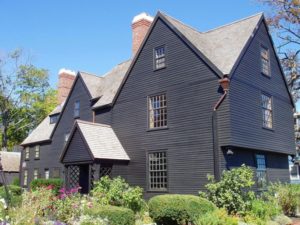 The Taylor-Ingersoll House in Salem

The Scarlet Letter has had numerous adaptions in film and television, while those for The House of Seven Gables have been more limited. It was first filmed as a silent short film in 1910 and remade as a short in 1967. The best-known version is the 1940 movie of the same name, starring Vincent Price. It was filmed for television in 1960 as a one-hour episode for The Shirley Temple Show, with Agnes Moorehead as Hepzibah, Martin Landau as Clifford, and Shirley Temple as Phoebe.

With The Scarlet Letter, The House of Seven Gables solidified Hawthorne’s reputation as a preeminent American author in both America and Europe. The book is relatively short, and it relies heavily on the atmosphere of house to help tell the story, an atmosphere centered on the portrait of the first Judge Pynchon, he of the witch trials, which stares gloomily on all who enter the parlor and the house. And it’s still a fascinating story, almost 170 years after its first publication.

Numerous books, articles, websites, and videos exist to help with classroom teaching about The House of Seven Gables, Nathaniel Hawthorne, America literature of the mid-19th century, and related subjects.

A Brief Biography of National Hawthorne by Henry James (1897)

Salem is My Dwelling Place: Life of Nathaniel Hawthorne by Edwin Haviland Miller (1991)

The Salem World of Nathaniel Hawthorne by Margaret Moore (1998)

Hawthorne: A Life by Brenda Wineapple (2004)

The Real Blithedale Romance: The Love and Marriage of Nathaniel Hawthorne and Sophia Peabody by Paul Brody (2013)

Hawthorne in Concord by Philip McFarland (2013)

A Short Biography of Nathaniel Hawthorne by Camille Arbogast (2019)

A list of websites on Hawthorne, his books, and movies and television programs based on Hawthorne’s works

Places in Hawthorne’s life and writings

History Meets Fiction at the House of Seven Gables