Editor’s Note: Some of the themed work Tweetspeak offers is regularly set aside as thanks to our Patrons, whose generosity helps us bring kindness, friendship, and joy to the world.

Today, we hope you’ll enjoy this “Literary Friends” themed piece as our holiday gift to you—a piece that ordinarily would have been for patrons only.

I was a few decades older than seven when I was standing in the gift shop at St. Martin-in-the-Field Church in London, holding a small, Collector’s Library edition of the book. I realized I’d never read it. The church made a sale that day and the book found its way into my suitcase home. The story is different from the movie, but Disney generally stayed true to the basic outline. From about the age of 10, I’ve been reading the Sherlock Holmes stories of Arthur Conan Doyle (1859-1930). I’m not sure what to call them; legends, perhaps, or the great myths of detective fiction? A Study in Scarlet, the novel and the first appearance of Holmes, was published in 1887. Doyle was rather ambivalent about Holmes and at one point killed him off; the reading public was not impressed, and 10 years later, Doyle resurrected him, going on to write more stories and the novels The Hound of the Baskervilles and The Valley of Fear. Despite their relatively short run, the stories of Holmes and Dr. John Watson have never let go of the world’s imagination.

In late 1891, four months after the first Sherlock Holmes short story, a parody was published in Speaker Magazine, entitled My Evening with Sherlock Holmes. The anonymous author turned out to be one James M. Barrie.

Fellow Scots, Barrie and Doyle didn’t meet until 1892, when both men were writing for The Idler, a literary magazine based in London and edited by Jerome K. Jerome. The Idler attracted a talented group of writers and artists, including Rudyard Kipling, H.G. Wells, Guy de Maupassant, and Mark Twain. Barrie and Doyle apparently became good friends from the outset. They must have looked odd together, with the 6-foot-1 Doyle towering over the 5-foot-1 Barrie. But good friends they became, and good friends they remained.

In 1893, two events demonstrated to what lengths they would go to for each other.

The first had to do with an operetta called Jane Annie. The story is set in a school for young ladies, with two of the girls competing for the affections of two young men and complicated by a headmistress who’s determined to prevent her students from eloping. Jane Annie is one of the two young women, and she possesses the gift of hypnotism, using it freely to help achieve her prize.

If it sounds faintly ridiculous, that’s because it is. And rather farfetched, and often contrived, with occasional flashes of humor. Reading it today is like reading a pale imitation of a Gilbert & Sullivan operetta. One of the songs in Jane Annie includes these lyrics: 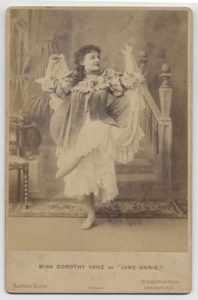 Dorothy Vane as Jane Annie in the 1893 production

Barrie had been commissioned to write it, and the deadline was imminent. He called Doyle, telling him he was seriously ill and asking him to visit. Doyle did, discovering the illness was a massive case of writer’s block. But he sat down with Barrie and began to write, completing the manuscript. Imagine the two friends, with their Scot accents, drafting and singing the lines of songs and dialogue as they wrote the text.

The operetta was staged at the Savoy Theatre. The Times of London rather liked it. No one else did. George Bernard Shaw panned it. The operetta did not become a staple of musical theater, and likely for good reason. But Doyle had come through for his friend, and the friendship deepened as a result. Based on their work on Jane Annie, Barrie wrote another Sherlock Holmes parody, The Adventures of the Two Collaborators. Late in 1893, after Doyle killed off Holmes in what he hoped was the last story, the St. James Gazette published yet another parody by Barrie, The Late Sherlock Holmes, in which Watson is arrested for Holmes’ murder.

Besides operettas with singing schoolgirls and parodies of Sherlock Holmes stories, Barrie was also into cricket, and he was so into cricket that he formed a cricket club. He recruited Doyle, other writers, friends whose wives he rather liked, single men who looked physically odd – the recruiting reasons were wide and varied. Unfortunately, they didn’t include skill at cricket, except for Doyle. They were not a winning club.

The games must have been at least occasional agony for Doyle, who was a rather good player. One member asked which side of the bat should be used to hit the ball. Another didn’t have the regulation cricket whites to wear, so he showed up in his white pajamas.

Yet, lack of skill and experience notwithstanding, the team continued for 26 years, until World War I ended the festivities. Members varied over the years, but included P.G. Wodehouse, Jerome of The Idler, Kipling, Wells, A.A. Milne, and G.K. Chesterton. And Doyle. That meant that Doyle and Barrie were still playing cricket into their 50s.

Barrie and Doyle remained friends for almost 40 years, until Doyle’s death in 1930. Long before his death, Doyle had said this about his friend James Barrie – that he was a man, “about whom there was nothing small except his body.” Barrie, speaking of Doyle after his death, said “I have always thought him one of the best men I have ever known, there can never have been a straighter or more honourable.”

That’s a legacy of both literary and personal friendship.

Photo by RichardJames1990, Creative Commons, via Flickr. Post by Glynn Young, author of the novels Dancing Priest, A Light Shining, Dancing King, and the newly published Dancing Prophet, and Poetry at Work.

Enjoy more themed articles like this one,
when you become part of the Tweetspeak community
that helps us continue to bring
kindness, friendship and joy to the world.

Just click on the gift, then join us through Patreon
for as little as $1 a month, to get started.