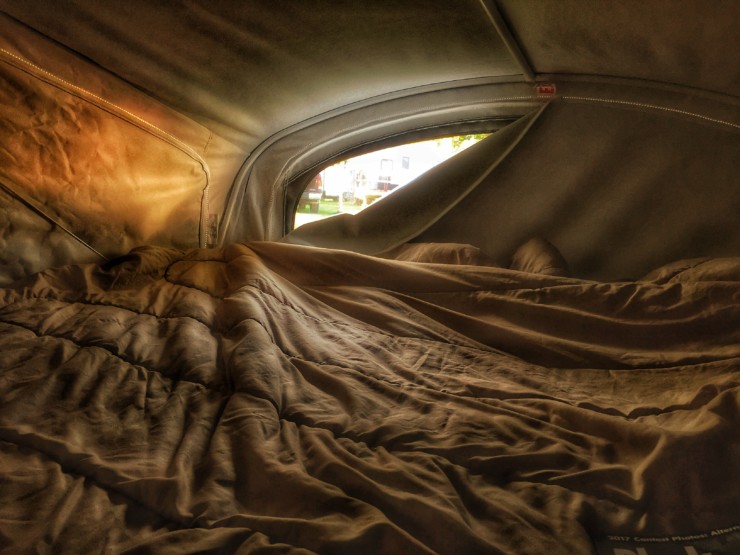 In last month’s Children’s Book Club, we read Anne Frank: The Diary of a Young Girl, Anne wrote this about her love for the outdoors: “The best remedy for those who are frightened, lonely or unhappy is to go outside.” This month we read poems from the perspective of a young girl who does just that. Kristine O’Connell George’s book Toasting Marshmallows: Camping Poems takes us into the interior world of a child as experienced while camping with her family.

A poet friend has been telling me about this collection of camping poems for several years, but I couldn’t find it in the library. Turns out it was on a different shelf than the other Kristine O’Connell George poetry books. I read it right before our trip west, and the dedication honors the author’s family camping trips in an orange tent to destinations that included California, Idaho, Utah, and Wyoming. The thirty poems describe a journey — an outer one and also an inner one — that happens when a child connects with the natural world. The poems present a girl with an interior life, a girl who likes to take a Forest Walk alone. Her shared experiences with her family are subjects of many of the poems, from the setting up of “Tent” to the taking down of “Pulling Up Stakes” to the titular Toasting Marshmallows. In “Cave,” the girl explores “black passages / in this alien underground land” hand in hand with her dad.

But my favorite poems show a girl experiencing nature alone.

The best paths
are whispers
in the grass,

a bent twig,
a token, a hint,
easily missed.

The best paths
hide themselves
until the right
someone
comes along.

The best paths
lead you
to where
you didn’t know
you wanted to go.

The tone of these poems is inviting, and the paintings by Kate Kiesler are idyllic. In “Sleeping Outside,” we join this child as she muses about “a small tent / staked to a huge planet” with illustrations of star-speckled pines. We visit exotic locales like “Max’s Bait Shop,” “Abandoned Cabin,” and “Old Truck,” where her imagination comes alive.

This girl is just the right age for exploring, getting dirty, discovering the wonders of things that might not sound wonderful, like mosquitoes, bees, mice, and spiders. Oh, sure, she also encounters also a doe and an owl and a moose, but part of the fun of going outside is abandoning your critter prejudices.

George’s poetry books for children (I’ve read three of them) always include a shape poem. In this collection, I like “Eavesdropping,” shaped like a crescent moon. The moon curves left instead of right, so the first line is near the middle of the page. The very shape of the poem makes the reader slow down.

Similarly, the poem “Flashlight” is actually four haiku, each spotlighted inside a family member’s flashlight beam:

Green bug on my book
pushing his long, important
shadow up the page.

Many of George’s poems take one thing and look at it in an unusual way. A pebble used for skipping is a “telegram.” In “Rowing to the Island,” a girl and her mother do just that, but the poem describes the action this way: “Such hard work, / pulling an island / across a lake.”

We don’t often give children enough time and space outdoors to do important things, like skip rocks, or pick up two — “one to keep, / one to hide / in my secret place.” Do we allow children time to sit long enough to count seventeen jays, to watch a cloud that looks like a panther, to wait “until the beetle reaches the pine” (from “By Myself”)?

Kirkus Reviews praised “Toasting Marshmallows,” saying, “The changing layout of each page gives a sense of surprise to the most ordinary of events.” The camping activities rendered as poems and illustrations in this book may be ordinary, but they are not typical. Not enough children are transformed in the presence of a “Moose Brunch,” in which the creature “halfway / between a camel and a horse, / with a bit too much of everything” munches “daintily / on wet green weeds.”

When this girl returns home, the journey stays with her. Her Flannel shirt, with its treasured camping smells, stays hidden in her bottom drawer: Photo by Chris, Creative Commons, via Flickr. Post by Megan Willome, author of The Joy of Poetry.