In July of 1977, my wife and I took a break from moving into a new house in Houston and made our way to the local movie theater. It was the opening day for Star Wars, and we went to the early afternoon showing. Except for us, the theater was almost empty. We loved the movie. When we left the theater, we discovered where all the people were—the line was more than two blocks long.

It was our introduction to the Star Wars franchise, now more than 40 years old. We ended up skipping the three prequels, but we returned for the three with Princess Leia and Luke Skywalker, including the most recent release, The Last Jedi.

We saw the George Lucas (and later Disney) productions. We didn’t know about the Shakespeare versions. I wonder how the Globe Theatre would have managed the battle fleets and the Death Star back in the early 1600s. And the light sabers.

You didn’t know about the Shakespeare versions?

Try this. And read it aloud. 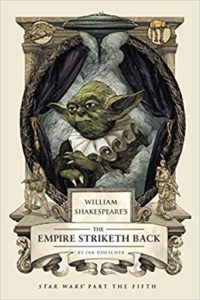 O, ‘tis for the Rebellion a dark time.
For though they have the Death Star all destroy’d,
Imperi’l troops did from the ashes climb
And push the rebels closer to the void.
Across the galaxy pursu’d with speed.
The rebels flee th’Imperi’l Starfleet vast.
A group with Luke Skywalker in the lead
Hath to the ice world known as Hoth flown fast.
Meanwhile, the cruel Darth Vader is obsess’d
With finding your Skywalker. Thus he hath
Through ev’ry point of space begun his quest
By sending Robot probes to aid his wrath.
In time so long ago begins our play,
In war-torn galaxy far, far away.

I suppose if movies can be novelized, they can be “Shakespearized” as well. In fact, I’d wager the Shakespeare versions are better than the novelizations.

These Shakespeare editions of Star Wars are marvelous. Prithee, accept my judgment, else thou be a knave. This theatrical scribe achieveth no mean feat.

The rest of the characters speak like they’re on the stage of the Globe. There are soliloquies and asides to the audience. Even R2-D2 speaks the Queen’s English (the old queen, that is, Elizabeth I) when he imparts information directly to the audience. And Yoda, the rather gnome-looking Jedi knight, speaks only in—wait for it—haiku, as when he’s arguing with the ghost of Obi-Wan Kenobi whether Luke Skywalker is ready for Jedi training or not.

Much anger in him.
Sudden and quick in quarrel:
Too like his father. This looks almost effortless, but even with a script to start, all of these “Shakespearizations” must be hard work. And something odd happens to the reader: The characters and themes and scenes may be Star Wars, but the reader comes away with a better appreciation of what Shakespeare achieved in his plays. And you also get to see Star Wars in an entirely different frame of language.

Doescher received a B.A. degree in music from Yale University, a Master of Divinity degree from Yale Divinity School, and a Ph.D. from Union Theological Seminary. He’s an ordained Presbyterian minister and is currently director of nonprofit marketing at Pivot, a marketing agency in Portland, Oregon. And somewhere along the way he managed to study Shakespeare and learned how to write like Shakespeare.

Of these works, methinks I doth find myself enamored.

Photo by Sam Bald, Creative Commons, via Flickr. Post by Glynn Young, author of the novels Dancing Priest, A Light Shining, and the newly published Dancing King, and Poetry at Work.