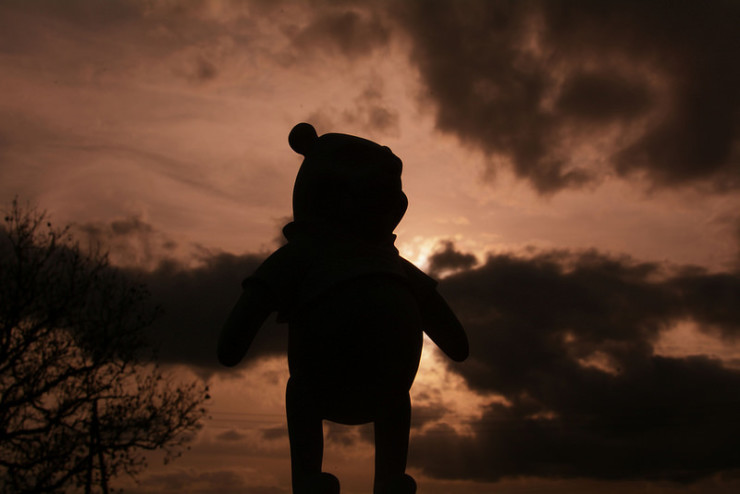 Once upon a time, three brothers lived happily in a snug little house in the forest. There was a big brother, a medium-sized brother, and a baby brother, who had lots of curly hair.

One morning, as they tasted their daily porridge and doughnuts, they discovered that their breakfast was a little too hot. So they decided to go for a walk in the woods and let their porridge and doughnuts cool a bit. And off they went, singing as they went along. They even left their iPads at home so they could fully enjoy their walk and not trip as they checked the latest available games.

A few minutes after they left, a little girl named Goldilocks came along. As she was checking her text messages on her iPhone, she didn’t notice the cottage door until she had walked smack into it.

“Oh!” she said, rubbing her head. “My goodness, what is this? And do I smell porridge and doughnuts? Perhaps it is a Starbucks!” She knocked on the door, and hearing no response, she turned the handle and opened it. Yes, this is something of a send-up of “Goldilocks and the Three Bears.” It is also one of the “Grandfather Stories” that I tell my three grandsons, ages 7, 5, and 2. We started with the real stories, and progressed from there. Or perhaps we regressed.

My wife and I started reading early to the grandsons, well before they were a year old. The youngest, now 2, had difficulty breathing when he was born, and my wife sat in the infant ICU with him, reciting nursery rhymes – which had the odd effect of calming him down. We continued with the nursery rhymes, as the picture of me reading rhymes to him attests.

Reading to our grandchildren taught us something. The “social time” is just as important as the reading. When you’re reading nursery rhymes or stories, you are spending time with those children, and that’s communicating something powerful – you’re telling them that they matter enough to be given your time and attention.

The now-5-year-old was a late talker, and when he did start, he handed a story book to his mother and said, “Read a bookie.” He loves being read to. And his favorite stories are The Tales of Peter Rabbit by Beatrix Potter. It helps to add some drama. “Whose farm did Peter come to?” I ask. His eyes get huge and he shouts, “Mr. McGregor!” This isn’t just listening to a story; this is participatory listening. His older brother rolls his eyes in mock boredom when we move from Peter Rabbit to Benjamin Bunny and Jemima Puddleduck, but I can see him leaning towards us, listening. We read a lot of stories. The 2-year-old still loves nursery rhymes, and as we finish one book, he trots to the pile of children’s books and selects another.

The 7-year-old is now reading stories to us. His 5-year-old brother, not to be outdone, “read” Five Little Monkeys to us one night, essentially reciting it from memory.

Reading stories connects four generations of my family. One of the earliest memories I have is my mother reading fairy tales from a big green-covered book called Stories Children Love, first published in 1927 and edited by Watty Piper. The stories include “Little Red Riding Hood,” “Peter Pan,” “Cinderella,” “The Three Bears,” “Jack and the Beanstalk,” and several others. I still have the book.

We read to both of our sons. Our oldest, the father of the three grandsons, adored Pooh’s Schoolhouse, produced by the Disney empire. I am not exaggerating to say I read that book at least a thousand times. He still remembers listening to The Chronicles of Narnia by C.S. Lewis. We read to his younger brother, too, who was at the perfect age when J.K. Rowling’s Harry Potter novels began to appear. A page from “Stories Children Love”

I’m not sure when my grandsons and I moved from the “real” stories to “those weird stories Grandpa makes up.” In addition to “Goldilocks and the Three Brothers,” we have “The Three Brothers and the Big Bad Wolf,” and “Cameron and the Beanstalk” (Cameron is the 7-year-old). I tried “Caden and Gretel” (for the 5-year-old) but he shook his finger at me with a very stern “NO!” And we’ve done “Jacob Had a Little Lamb” for the 2-year-old. What I’m doing, of course, is inserting them into the stories. The two older boys love it. The younger one smiles and brings me another book to read.

And I’m thinking. The next story may be Cameron Pan, with the younger brothers playing John and Michael. A little girl who lives down the street from my grandsons might be the Wendy character. And I need someone for Captain Hook.

Photo by John Collins, Creative Commons, via Flickr. Post by Glynn Young, author of the novels Dancing Priest and A Light Shining, and Poetry at Work.

Peek at the Molly and Joe Reader