A Sunday afternoon in late May: I’m biking Grant’s Trail in suburban St. Louis, roughly 17 miles of an asphalt trail that at one time was a railroad track. Add the mile-and-a-half from my house to the trailhead, and I have a relatively flat 20 miles round trip.

I’ve been biking this trail since 2005, when it was three miles shorter, and a rather bumpy ride over old railroad bed gravel. My first ride over the pre-asphalt section led me to the discovery of the unexpected hole. Fortunately for my dignity, no one was nearby to witness the aging cyclist hit the hole, fly up from his bicycle seat, and spend the next few seconds (eternity in the moment) struggling to stay upright. I managed it. Barely.

But the unpaved became the paved, the hole was filled in and covered over, and the ride became less eventful.

I was on the return portion of the trail, and had just ridden under Interstate 55. I came up to a crowd of walkers, joggers and bikers who were standing on the trail in complete silence. I looked.

The trail is eight feet wide, four feet for each lane. Stretching across six of the eight feet was a Missouri black rat snake. I had seen larger snakes at the St. Louis Zoo. I had never seen one this big in the wild. It was moving, slowly, from one stretch of wooded brush to a more heavily wooded area. Grant’s Trail traverses several county parks, the Grant’s Farm Children’s Zoo (and Free Beer Tent), the Ulysses S. Grant home of Whitehaven, and some fairly wooded areas that have yet to fall to the developer’s ax.

It was one of these where Mr. Big Black Snake was traversing. He (or she) finally went on its way, and so did the rest of us.

I’ve come across smaller black snakes on the trail, and a few other kinds I did not stop to inspect, but none as spectacular as that big one. 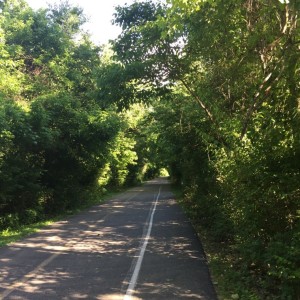 The wildlife-laden section of Grant’s Trail, home to deer, turkeys, and snakes.

Snakes notwithstanding, one section of Grant’s Trail is the most wildlife-saturated. The eastern side, near where it ends alongside Interstate 55, is home to all kinds of animals. I once passed a family of wild turkeys—two adults and eight chicks—strolling alongside the trail and not bothered in the least by helmeted-aliens wearing Lycra tights and rolling by on two wheels.

My brakes worked. They also worked with the suicide squirrel, who decided we were in a race and kept throwing himself at the spokes of my front wheel.

One of the most incredible experiences I’ve had on area trails wasn’t on Grant’s Trail, but on the Katy Trail, which stretches 264 miles from just north of St. Louis to Clinton, Missouri, about two-thirds of it along the Missouri River.

I was riding from St. Charles in suburban St. Louis to Augusta (Missouri wine country), and I heard a “whoosh” just to my right. I looked; an American bald eagle was flying alongside. Our togetherness continued for about two minutes (another one of those eternities in the moment). I was wondering if he considered me lunch, or at least worthy of lunch (they are raptors, after all, but I’ve never heard of a bald eagle attacking a human).

Then, he soared upward and over me, flying toward the river.

Everything they say about the bald eagle is true. Majestic. Beautiful. Awe-inspiring. Powerful. I just never expected to be able to be close enough to almost touch one. And on my bike. Two Clydesdale horses in a pasture adjacent to Grant’s Trail

Two weeks ago, I was on Grant’s Trail, stopped at a traffic light for one of the major thoroughfares the trail crosses. A man, one of several adults shepherding a group of young children, asked me why I biked. “I’m seeing all kinds of people on bikes around here, ” he said. “Why do you do it?”

My automatic response was “the exercise, ” and he nodded but looked unconvinced.

“No, ” I said, “it’s more than that. It’s the joy, that joy that comes from the surge that happens right when you think your legs will give out.”

He grinned. “Like the second wind in basketball, ” he replied. “That I understand. I got it.”

But it’s more. It’s the joy of encountering the unexpected, like the big snake. It’s the creation of stories that come from doing the out-of-daily-routine. It’s the joy of seeing the Clydesdales horses at Grant’s Farm, running through the early morning mist. It’s the joy of being accompanied by an eagle, and the two of you are the only living things in sight.

It’s the poetry, the natural poetry, of the biking trail.

Photo by OmerUnlu, Creative Commons, via Flickr. Post by Glynn Young, author of the novels Dancing Priest and A Light Shining, and Poetry at Work.